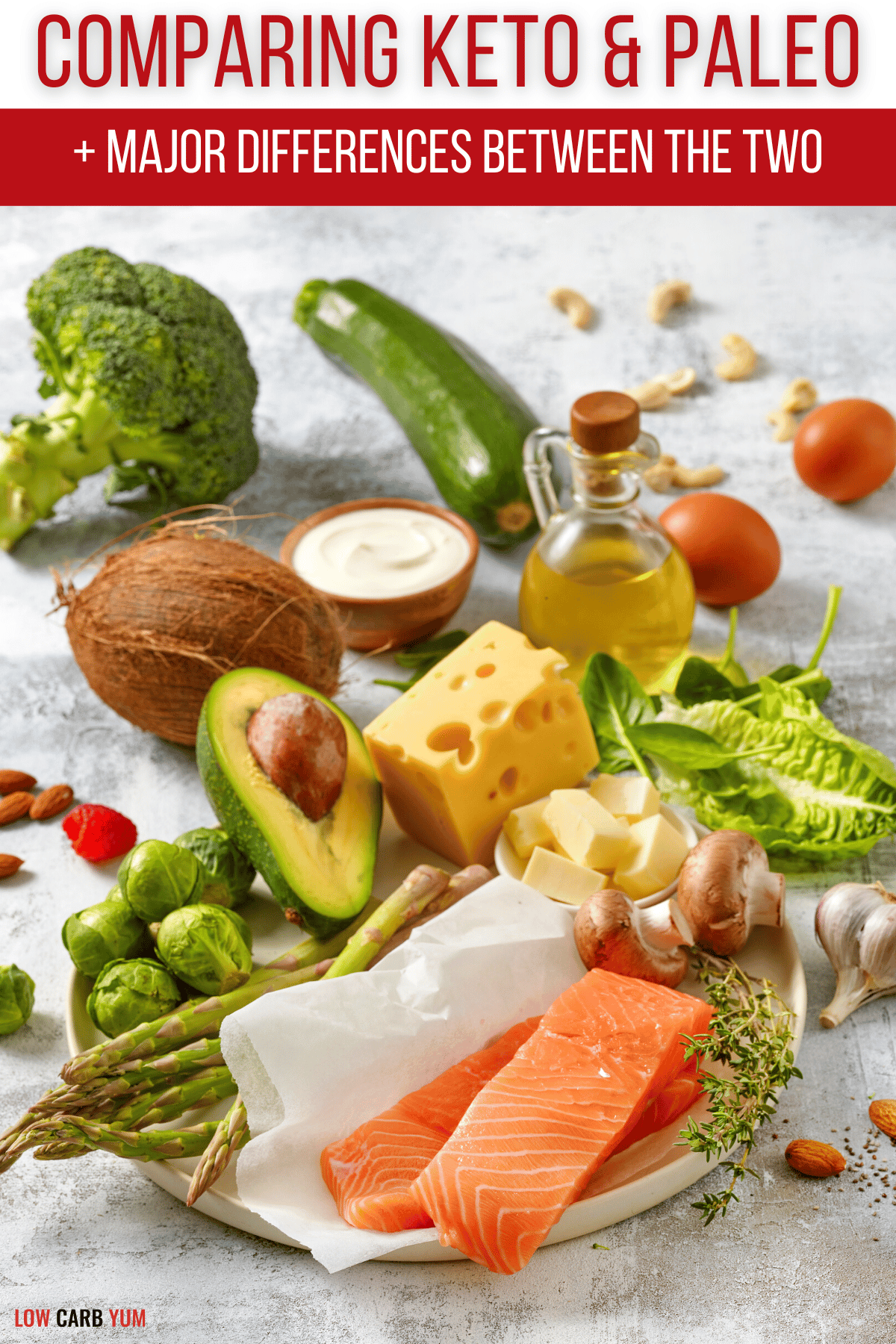 The keto and paleo diets are two ways of eating that have become popular in recent years. They are sometimes confused because they are so similar, however, there are some major differences between the two diets! This guide will teach you everything you need to know.

Keto and paleo are some of the most talked about diets out there. Both feature a focus on eating “real foods” (i.e. unprocessed), cutting out grains and refined sugar, and generally focus on meals that have limited amounts of carbohydrates.

That said, the keto and paleo styles of eating are actually really different!

The paleo diet, which is short for the paleolithic diet, is also called the caveman diet. This is because it involves eating as our hunter-gatherer ancestors would have. It makes choosing food choices really easy as you’re only allowed to eat plants and animals. No processed foods are accepted, and you’re also required to avoid grains and carbohydrates — which as you may or may not know, is also a major tenant of the keto diet.

The keto diet is all about getting in more healthy fats and cutting out starchy carbohydrates. Carbohydrates are found in many types of foods. Not all carbs are created equally, and when you’re on keto, it’s important to opt for healthy carbs like whole grains, fruits, and veggies. The keto diet requires you to eat 70% healthy fat, 25% protein, and just 5% carbs — these percentages refer to your calorie intake, and are called macros.

Keto vs. Paleo For Inflammation

There are several different reasons why you may want to start eating keto or paleo. The first we’ll cover today is inflammation. Inflammation is just your body’s way of reacting to something that irritates it. It could be a wound, but for the sake of today’s article, it could be something you eat. You can adapt your diet to reduce inflammation and both of these diets help with it.

Paleo and keto diets help promote anti-inflammation. When you go on the keto diet, your ultimate goal is to get your body into ketosis, which is a metabolic state in which your body burns fat instead of glucose (found in carbs) for energy. The ketones that are produced during ketosis have anti-inflammatory effects. It can protect you against chronic diseases such as diabetes and Alzheimer’s.

Folks with autoimmune issues often opt for the paleo diet as it cuts out many more allergens like gluten and dairy. These two categories of food are often the cause of inflammation for many people, even those who don’t have autoimmune diseases.

Keto vs. Paleo For Weight Loss

Another reason to try out the keto or paleo diet is that they may promote weight loss. Both diets focus on eating whole foods instead of processed junk. So, it should come as no surprise that people tend to drop a few pounds when they begin eating paleo or keto.

Keto tends to be slightly more effective when it comes to weight loss, as ketosis burns fat for energy. That said, paleo also encourages you to avoid processed food and items that are rich in carbs. It’s only natural that you’ll lose weight when you cut out these types of foods!

There isn’t a lot of research out there about how long these types of diets can be sustained. But short-term studies do show that both diets can help you drop some pesky pounds and are worth a try.

There are many similarities between paleo and keto, but there are also some important differences. Let’s break some of them down.

Similarities Between Keto And Paleo

Both keto and paleo diets do the following:

The two styles of eating involve increasing your intake of certain food groups while completely eliminating others. There is a huge focus on whole and unprocessed foods — in other words, they ask you to eat products that are in their most natural state.

The paleo diet doesn’t allow for legumes, grains, or sugar as these items didn’t exist in the hunter-gatherer era. Keto avoids them as well, since they are all very high in carbohydrates. Healthy fats are highlighted in both because they’re just plain good for you!

Differences Between Paleo and Keto

Because both diets encourage healthier eating, it can be easy to confuse them. However, there are a few major differences between the two:

When you start researching more about paleo, you’ll notice that there is also an emphasis on leading an active life — remember, our ancestors were required to hunt for their food, and they were a lot more active than we are today. Paleo encourages exercise as well as nutrient-packed eating. Keto doesn’t require a lifestyle change, at least in terms of physical activity.

When you go on the keto diet, you have to count your macronutrients in order to make sure that you’re getting in the correct ratio of protein, healthy fat, and carbohydrates. After all, in order to reach ketosis, you must eat a lot of fat and restrict your carbs and eat less protein. Paleo is a lot more flexible: as long as you’re eating the allowed foods, you don’t need to monitor your macros.

When you go on the keto diet, the goal is to push your body into ketosis. You want to switch your body’s source of energy from glucose to ketone bodies, which are made of fat. Ketones are usually not mentioned when talking about paleo.

Keto vs. Paleo vs. Atkins — And What About Whole30?

There are some other diets that often come up when discussing keto vs. paleo, including Atkins and Whole30. This is because all of them could be considered to be low-carb. We’ve also discussed keto and paleo in-depth, now let’s talk about Atkins and Whole30.

What Is The Atkins Diet?

The Atkins diet is named after Dr. Robert Atkins, the man who created it. It is broken up into different “phases.” In the first phase, your daily carbohydrate allowance is just 20g per day, making it a very low-carb diet. In fact, you just may enter into ketosis if you stay in Phase 1 for long enough — another reason why it’s often compared to keto.

As you go through the different phases, you’re allowed to up your carb intake. That’s the major difference between keto and Atkins.

Whole30 was created by Melissa and Dallas Hartwig. It is a 30-day challenge and is often called a “reset.” It asks you to eat only whole foods, and the list of things that you can and can’t eat is very specific and restrictive. It is usually discussed alongside paleo as you have to eliminate processed foods, dairy, and legumes for both diets.

It can also help you determine any allergies and intolerances as it cuts out so many different things. When you ease back into less restrictive eating, you’ll be able to tell if you have a sensitivity to things like dairy or gluten.

Again, it’s a very restrictive eating plan, which is why it’s only recommended for 30 days.

All of these diets — keto, paleo, Atkins, Whole30 — call for you to take a good hard look at what kinds of foods your putting in your body. They also ask you to take a step back and focus in on real, unprocessed products. All four tend to lean low carb, but keto and paleo are the most consistently low carb.

Remember to really explore all of your options before you commit to one or another.

If you don’t see your question answered below, don’t be afraid to let us know in the comments!

Which Is More Effective Keto or Paleo?

It really depends on your goals. If you simply want to drop a few pounds, both diets will be great for you. If you want to eat more nutrient-rich foods, paleo tends to be more effective as it is less restrictive than keto.

Is Keto Or Paleo Better For Inflammation?

Most experts agree that the paleo diet is better for inflammation and autoimmune diseases. That said, if you want to manage diabetes or PCOS, you may want to try keto instead!

Can You Do Both Keto And Paleo?

You can! If you want to follow the keto diet and also implement some of the aspects of paleo, you can benefits from both diets. Just remember: don’t get too obsessed. You could develop an harmful mindset which is the opposite of what both diets want to achieve: a healthy lifestyle.

Learn more about the low carb lifestyle with some of our other low-carb focused resources.