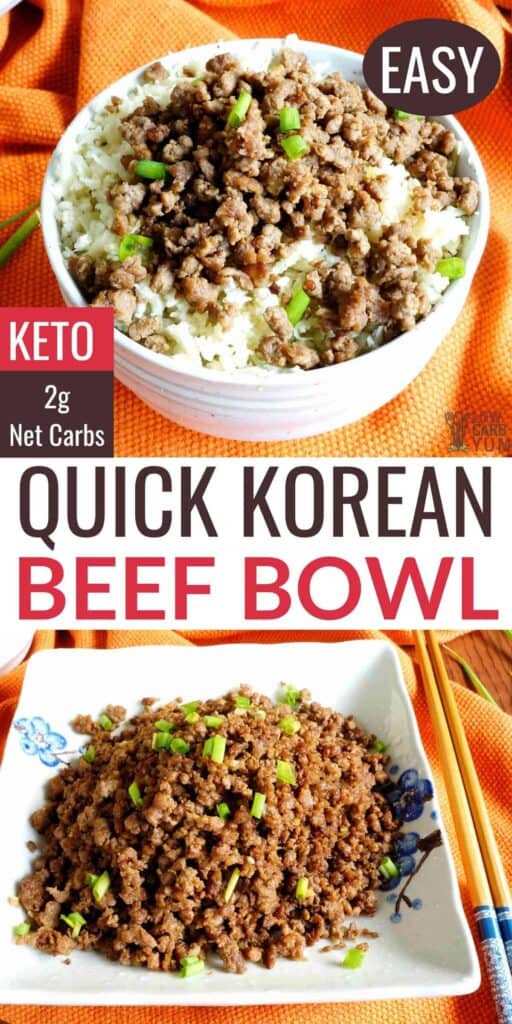 A paleo keto Korean beef bowl that cooks inexpensive ground meat with sweet and spicy seasonings. It's a dish that can be cooked and served within 15 minutes.

With the long, cold New England winter finally coming to an end, I don't want to be spending a lot of time in the kitchen making dinner. I'd rather be outside getting some fresh air after being inside an office all day.

In my search for quick and easy dinners, I created a keto Korean beef bowl recipe that can get you out of the house fast. It's made with lean ground beef which is one of the fastest meats to cook.

After browning the meat, it's simmered in a sweet and spicy seasoning mix to absorb the flavor. The sweetener and crushed peppers can be adjusted as desired to make it sweeter or spicier to suit your taste.

If you like the sweet and spicy taste of General Tso Chicken, this recipe has a similar flavor that you will likely enjoy. But this dish is sweetened without sugar to make it keto-friendly.

For an Asian inspired ground beef dish without any sweetener, you may prefer a Japanese hamburger steak instead.

How to make Korean ground beef bowl without brown sugar

The flavor of brown sugar can be created by adding a small amount of blackstrap molasses. Some may argue that this molasses is a sugar and not low carb, but it shouldn't be a problem when used sparingly.

However, it can be omitted if you are strict keto or paleo. A golden low carb sweetener could be used instead or a small amount of fiber sweetener syrup.

How to prepare Korean ground beef

This is one of the easiest skillet recipes ever! Just follow these simple steps.

What to serve with the dish

Although you can eat this dish plain, it's traditionally served as a Korean beef rice bowl. But we want to keep things low carb, so just whip up a quick batch of cauliflower rice in the microwave to serve it with.

The meat also goes well with a green salad, kimchi, or Asian slaw. You may also want to serve it with additional soy sauce or coconut aminos. And to spice it up more, sprinkle on additional crushed red peppers.

If you're looking for more low carb paleo recipes with ground beef, I've listed a few of my favorites below:

Do you have a favorite paleo ground beef recipe? I'd love to hear about it in the comments. 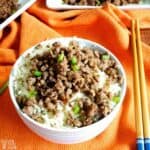 Those on strict keto and paleo can omit the blackstrap molasses or replace it with another suitable sweetener. Sesame seeds make a nice garnish to sprinkle on top to give the dish a traditional Asian touch.