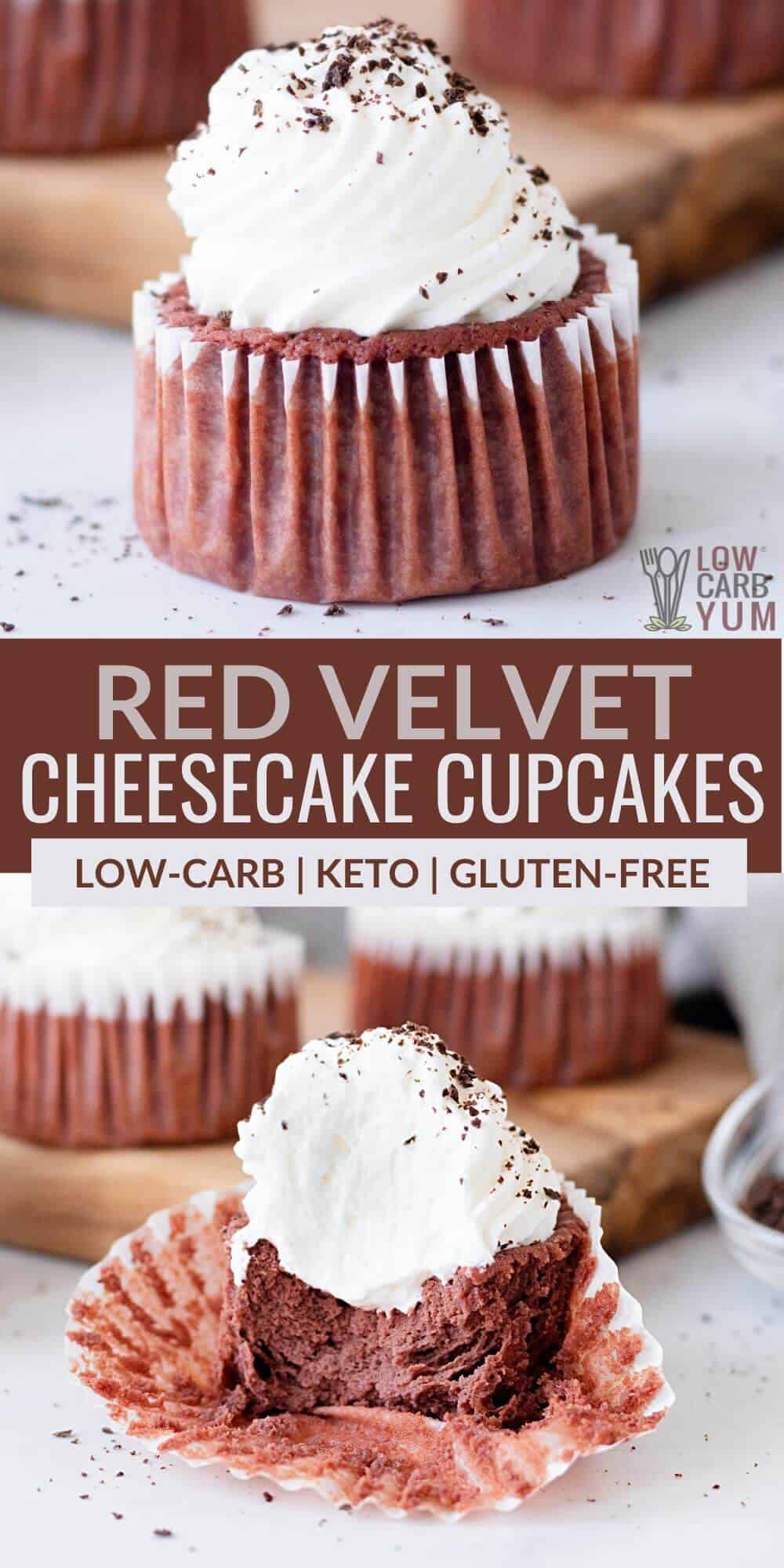 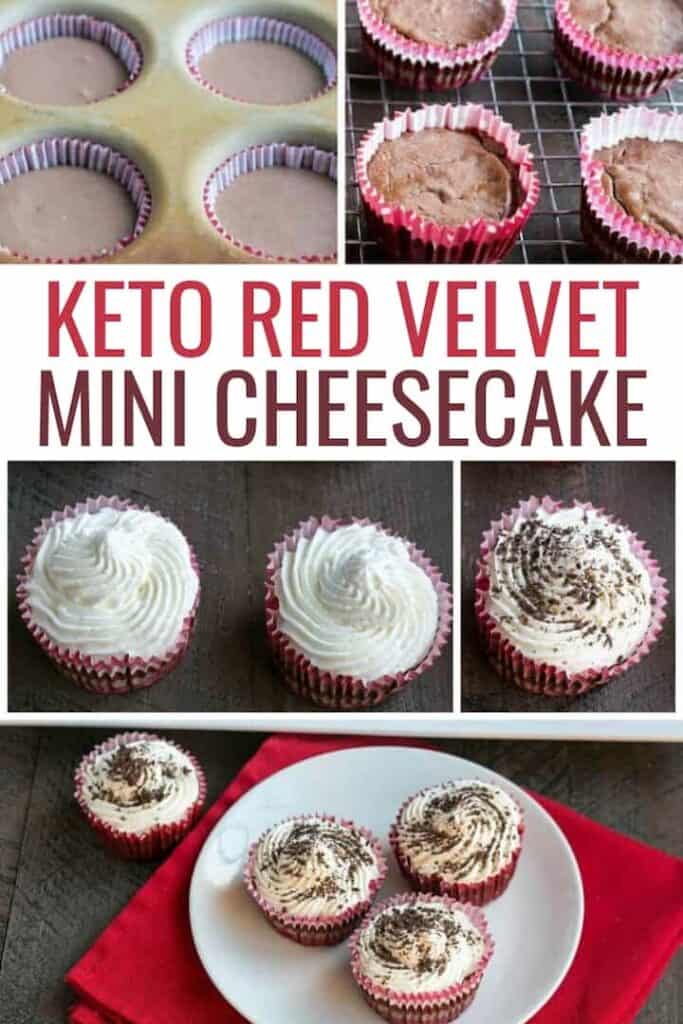 I love mini sized desserts because they are a great for portion control. That’s why I like to make extra cupcakes that I can easily stash away in the freezer for single servings later.

The great thing about making low-carb cheesecake is that you don’t need to use any flour substitute if you make it crustless. Although I usually include a crust when making them, I’d rather skip the extra carbs that come with it.

That’s why I prefer my cheesecakes crustless. So, for these tasty little red velvet cheesecake cupcakes, I left out the crust. You can certainly add one if you’d like, but it will add more carbs and isn’t needed. Believe me, you won’t even miss it.

You can serve these yummy cupcakes to everyone, even if they aren't watching carbs. No one will ever suspect they are keto friendly and made without sugar.

The recipe is super simple to make too. You just whip up the creamy cheesecake batter in a mixing bowl, bake in a lined cupcake pan, and frost. It couldn't get much easier!

This is also a delicious dessert to make for Valentine's Day.

One of the best things about this red velvet recipe is that it uses common baking ingredients. In fact, you may even have everything you need.

Since this is a cheesecake cupcake recipe, you need to have some cream cheese to get the classic flavor. Just make sure you soften the cheese before using so it mixes in well with the other ingredients.

If you aren't low-carb, you can use regular sugar in the cake and powdered sugar in the frosting. Otherwise, I recommend keto-friendly sugar substitutes to keep carbs low.

Red velvet gets a dark color from unsweetened cocoa powder. Most recipes use red food dye to give a red color but you can leave the dye out.

To hold the cake together, you need to include eggs as a binder and thickener. They also help give cheesecake a smooth texture.

I love to top these cupcakes off with a whipped cream based frosting. It's very light and fluffy.

To keep the whipped cream from flattening, you need to add a stabilizer. My preferred stabilizer is gelatin.

The great thing about adding vanilla extract is that it gives a touch of sweetness without any added sweetener. It really enhances the taste of any sweet baked good.

Note: Scroll down to the bottom of the post to view the full ingredient list with amounts used within the recipe card.

Ready to see how easy it is to make these cupcakes? Just follow these simple steps.

First, you'll beat the softened cream cheese in a large mixing bowl until smooth. and sugar substitute. Then gradually beat in the sugar substitute, cocoa powder, vanilla, and red food coloring (if using).

Next, add in the eggs, one at a time, beating after each is added.

The cream cheese mixture is then divided into a prepared muffin pan lined with cupcake liners and then baked until set.

Once the red velvet cheesecake cake has firmed up, the oven is turned off and the oven door is propped open. The cupcakes are allowed to cool down slowly in the oven for about fifteen minutes.

Remove the pan from oven and place the cupcakes on a wire rack. Place them in the refrigerator to chill for at least 2 hours.

The frosting is made by first whipping together the powdered sweetener and heavy whipping cream until thickened. Then the gelatin is mixed into cold water to soften then heated to dissolve completely.

The gelatin water is then slowly streamed into the heavy cream mixture while beating with an electric mixer. Once stiff peaks form, the frosting is done.

The tops of the red velvet cupcakes are not that pretty after baking so they definitely needed to be dressed up. You'll want to place the frosting in a piping bag to squeeze it out in nice mounds. I use this same whip cream frosting on my no bake key lime cheesecake in a jar recipe.

The sugar free whipped cream frosting looked very plain, so I grated a 90% cocoa dark chocolate bar into chocolate curls to sprinkle on top. Then, to dress them up for Valentine's day, I put the little festive holiday picks in them that came with the cupcake papers.

I have a keto ricotta dessert that’s basically mini cheesecakes baked in muffin cups. However, I never thought to frost them so they actually look like cupcakes.

I enjoyed these so much, I plan to try some different flavors. Just leave out the cocoa powder and up the vanilla extract for vanilla. Or omit the cocoa and add in pureed berries for either strawberry or raspberry. You can even add in some sour cream to the filling.

The whipped cream frosting can also be changed as well. A few ideas are to add in cream cheese or cocoa depending on the flavoring you are aiming for. Flavor extracts can be added as well.

Do you need to add red food color?

I stay away from artificial food dyes as they are known to have adverse side effects. Instead, I use a natural food dye. However the beet powder based natural food dye added  into the cheesecake batter doesn’t really show. Because of the dark color of the cocoa, I wouldn’t bother adding it next time.

How do they taste?

Before I even baked these little gems, I knew they were going to be fabulous because the batter was so tasty. My daughter and I scraped the mixing bowl clean to suck down every bit of the raw batter.

These mini desserts freeze well so you can always put half of the batch in the freezer to make sure you don’t overeat them. They are so good that you’ll want to hide them away so you don’t eat more than one. I kept them in a basement refrigerator so I didn’t have to see them every time I opened up our kitchen refrigerator.

If you want some other great keto dessert recipes to celebrate Valentine’s Day, be sure to check out these truffle recipes: 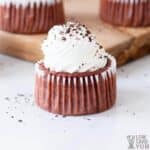 Erythritol not included in carb count. Each cupcake contains about 3.7g erythritol. Cheesecakes can be made with or without the whipped cream frosting.  Variations: