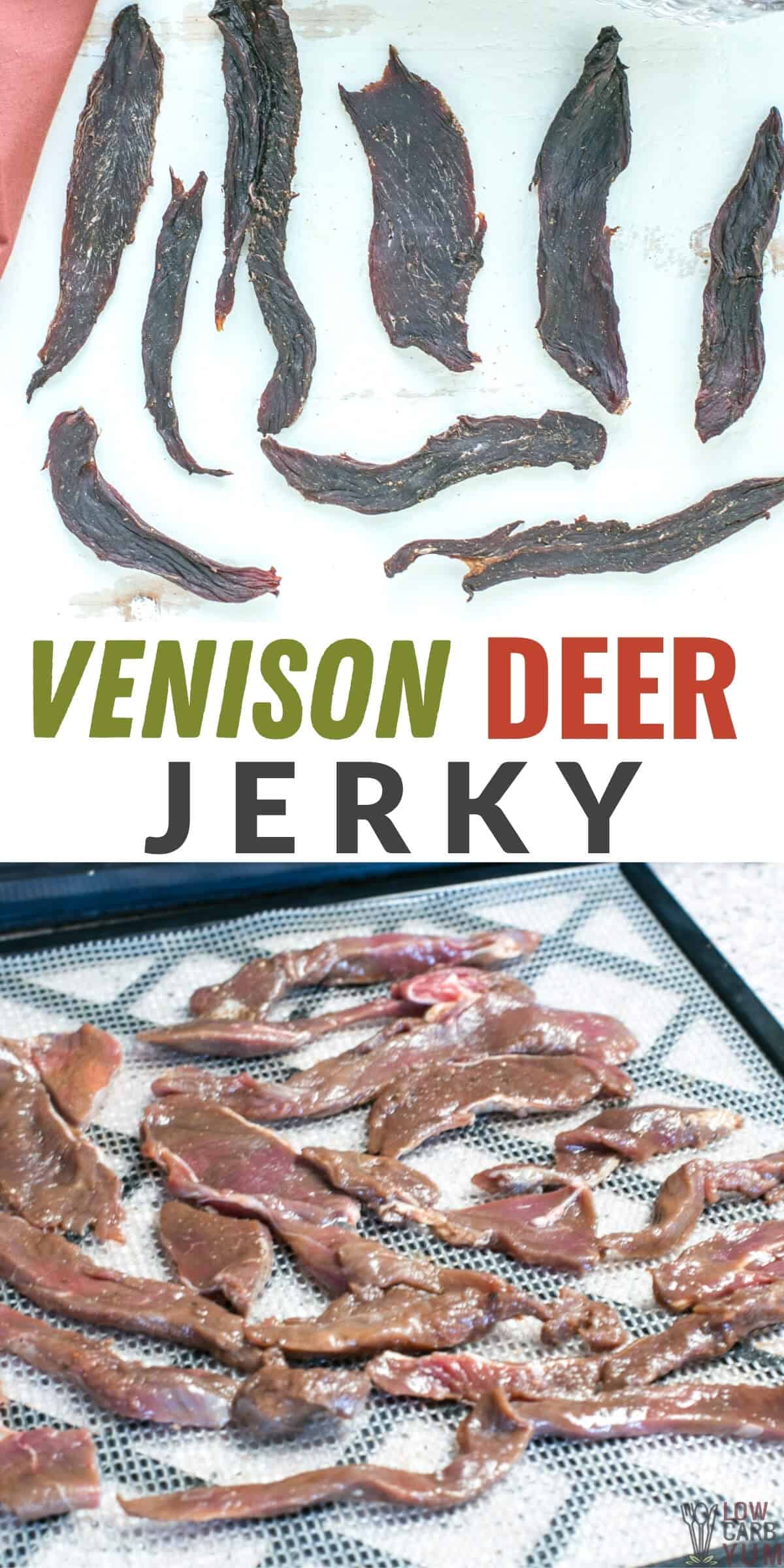 Need a good venison jerky recipe? Here's how to make deer jerky at home in the oven or dehydrator! You can also substitute beef or other proteins instead.

As I've been going through my freezers, I quickly realized I would have to donate all of the deer meat I had stowed away or make something that will get eaten quickly.

Besides making a couple of batches of venison chili for the family, I decided to use some of the leftover deer and make some of my homemade deer jerky. My husband and my son love jerky and I probably don't make it often enough!

I found some time to make a quick batch this past weekend and it was devoured within a day. Although I always make my deer jerky using a big dehydrator, making venison jerky in the oven is essentially the same process.

To make this deer jerky recipe, all you need are 8 simple ingredients and a dehydrator (or oven).

Almost every part of a deer can make good jerky, but, if you want the best chew and flavor, aim for the rump roast and eye round. These large cuts from the deer’s hind legs can yield several pieces of jerky. The arrangement of the muscles in the legs also makes cutting against the grain easier.

Cutting against the grain prevents ending up with long strips of tough-to-chew muscle fibers. To cut against the grain, slice through the fibers instead of along the lines they run. Your slices should be around ⅛ of an inch thick. Any thinner and your jerky may come out too dry!

Make sure each piece is roughly the same size, or you will have a mix of doneness. Before cutting your meat, you can partially freeze it to make the flesh firm and easy to slice.

How To Make Deer Jerky From Scratch

A lot of people who don't care about eating deer meat really enjoy this venison jerky recipe. In fact, if I don't tell them it's deer, most would think it's beef jerky!

Ready to learn how to make deer jerky at home and make your own venison jerky marinade? It's super simple and you can make sure there's no sugar or preservatives in it!

Make The Marinade For Venison Jerky

Combine all of the ingredients for the marinade in a bowl and whisk everything together.

I like to marinate the meat in a gallon-size zipper bag. But, if you're worried about the plastic chemicals leaching into the meat, you can use glass storage containers instead.

Cut The Venison Into Strips

If the meat isn't already cut, you'll have to give yourself plenty of prep time. It takes a while to cut up all the meat into thin strips. And, it's easier to cut if the meat is frozen or partially frozen.

When I first learned how to make deer jerky, I spent a lot of time trying to cut the membranes out. It was a waste of time! After the meat is dried, you won't really notice it. And, if you do, simply cut it out then.

It also doesn't matter if the pieces are of various sizes. However, I do try to keep a consistent thickness. And, I like to pull the smaller pieces out of the dehydrator sooner as they cook faster.

Cook The Jerky In The Oven Or Dehydrator

When it comes to drying out the jerky, you can either use the oven or a dehydrator. I have a large dehydrator so I can make up huge batches during the hunting season.

Note: I share instructions for both in the recipe card below!

When learning how to make deer jerky, you need to know when the venison jerky is done. What I do is bend a few pieces. If they break easily, it's time to take the jerky out.

Be sure to check the thicker pieces for doneness before taking them out. They can take a little longer to cook. So if they just bend without breaking, chances are it needs to be dried out more.

To be honest, I don't think you can really overcook the jerky too badly. It's cooked at such a low temperature another hour or two doesn't really make a big difference.

I prefer the meat to be dried out a bit more and I think it's better preserved when it is. You will find that this deer jerky recipe results in pieces a bit harder than store-bought.

The entire recipe and instructions are at the bottom of this post. First, I want to answer some common questions about this deer jerky recipe.

Do I need to cut out the fat?

When prepping your meat for deer jerky, I recommend trimming as much fat as possible. Leaving the fat behind can shorten your jerky’s shelf life since it spoils faster than meat.

Should I cook my deer meat before making jerky?

E.coli and parasites are the two biggest dangers when dealing with deer meat. Eliminate these organisms by steaming your meat and freezing it before dehydrating it.

Steaming or roasting deer meat to an internal temperature of 160°F will kill E.coli while freezing it at 0°F for 30 days will eliminate parasites and their eggs. The cuts should be less than 6 inches thick, or they might not steam or freeze evenly.

Why is my deer jerky molding?

Deer jerky should last for at least two weeks in a sealed container stored at room temperature. If mold starts growing on the dried meat after a few days, its dehydration was incomplete.

How long do I need to marinate jerky?

Marinating deer meat in a covered bowl or plastic zip bag should take about 24 hours for the fullest flavor. If you are vacuum sealing, 12 hours in the fridge is enough.

However, marinating longer than 48 hours can turn your meat to mush as the marinade breaks it down.

How can I make venison jerky last?

Your storage method will determine how long your jerky lasts.

If you want the meat to last even longer, store it in a fridge or freezer!

Learn How To Make Venison Jerky Yourself!

Once you discover how easy it is to make your own jerky, you won't be tempted to buy the kind in the stores. Plus, there are no funky added ingredients.

If you have access to other game meat, jerky is always an excellent option for preserving the meat. Dried meat is also one of the best keto snacks around!

Looking for more keto snack recipes? Take a look at some of these long time favorites: 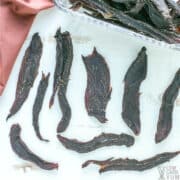 It's best to freeze deer meat for at least thirty days first, before jerking it, in order to kill off any bacteria that might be in the meat. Any wild game should be either cooked well or frozen for a month to be safe.