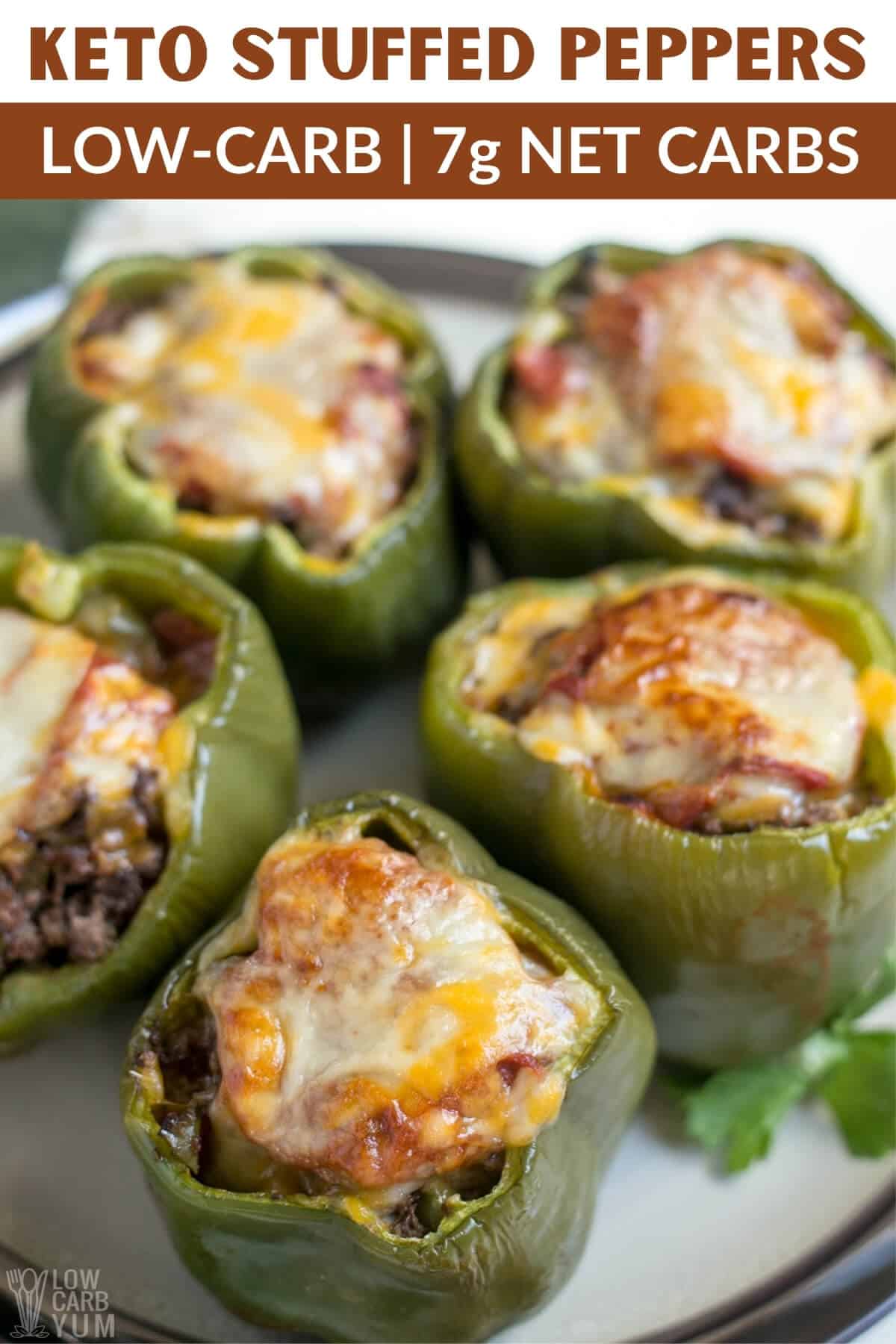 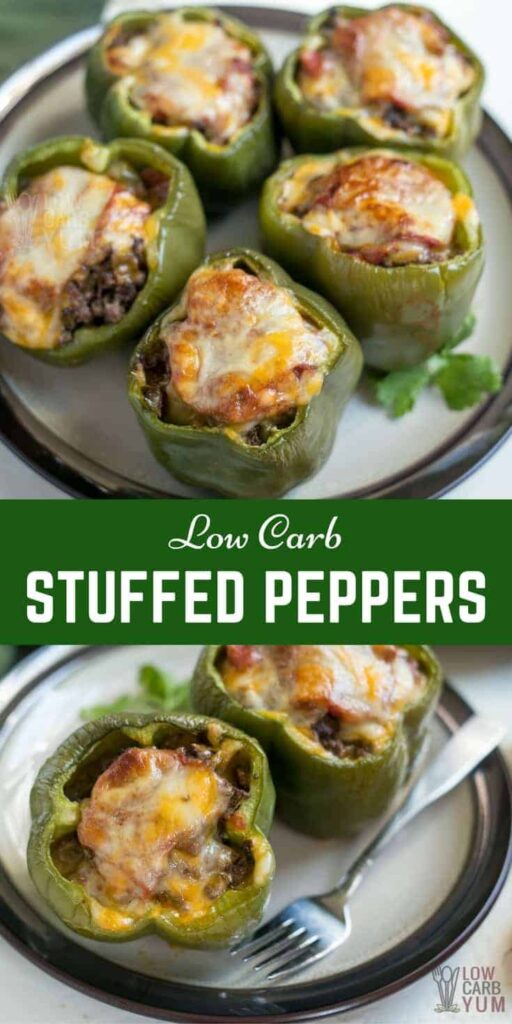 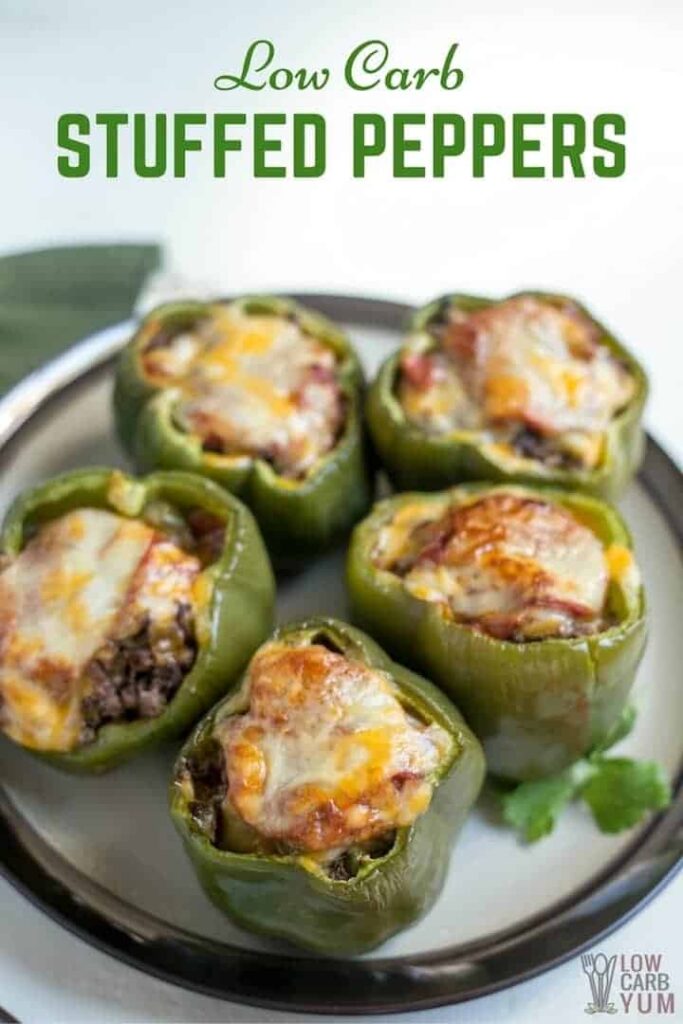 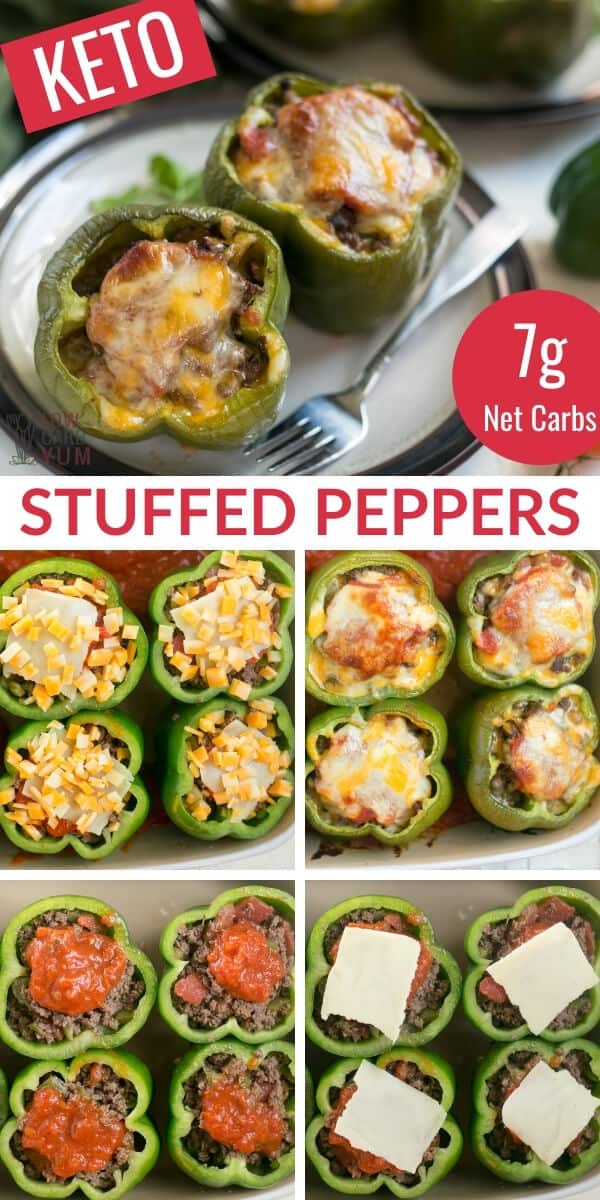 A meaty low carb stuffed peppers recipe that makes a tasty keto friendly meal. It can even be made ahead and frozen for an easy meal any time.

I've been looking for ways to use up our ground venison burger. My husband enjoys hunting and the start of the season is less than a month away.

I'll admit that the thought of eating deer really repulsed me before meeting my husband. I enjoy watching the wildlife and it was tough for me to eat at first.

But, then I started reading about how much more nutritious venison is compared to beef. That's when I starting using ground venison for all my hamburger meat recipes like this one for keto stuffed bell peppers.

I find the venison steaks to be a bit gamey. That's why I always ask to have the deer meat ground into bulk sausage and burger. When it's ground, other animal fats and spices can be added.

Green bell peppers aren't something I cook often so it was a nice change. Lately, I've been eating a ton of zucchini and cucumbers from the garden.

Here are the most common questions about the keto version of a stuffed bell pepper recipe.

What Is The Best Type Of Meat For Stuffed Peppers

Any kind of ground meat will work for these peppers. But pulled pork stuffed pepper taste great too.

I have grown to love deer meat and I rarely use ground beef or other types of sausage. We always have tons of venison meat in our upright freezer.

Since venison isn't as common as ground beef, I never list it as an ingredient. However, most of the ground meat recipes on this site were made with deer meat.

You'd never know these low carb stuffed peppers were made with venison instead of beef. Adding tomatoes is one way to hide any gamey taste.

What Can You Use Instead of Peppers

If you aren't a fan of bell peppers, or peppers in general, you can easily stuff the ground meat mixture into zucchini or squash. But, bell peppers tend to hold the stuffing much better unless you are using a round squash.

Do you have a favorite filling for stuffed vegetables? I'm thinking of making a lasagna stuffing next time.

How Do You Add Less Meat To The Peppers

If you want to use less meat in the stuffing, you can add in some cauliflower rice or Miracle Rice. Since I wanted to use up our ground venison, I kept the filling for the low carb stuffed bell peppers on the meaty side.

What Type of Cheese Is Best For Stuffed Peppers

You can also change up the cheese topping to suit your preferences. I had some slices of Colby Jack and mozzarella cheese so that's what I used.

Other types of cheese that work just as well are sharp cheddar or even spicy pepper jack.

How Do You Store Low-Carb Stuffed Peppers

These taste the best fresh out of the oven. If you want to make them ahead of time to save yourself time in the kitchen, I recommend filling the raw peppers with all of the ingredients (including the cooked meat).

Then, store the peppers in a sealed container in the refrigerator until you are ready to bake them.

If you have leftover peppers, keep them in the refrigerator in a sealed container for up to 4 days. They taste best if you heat them back up in the oven, but the microwave will work too (it will just make the peppers feel softer).

How Do You Make Stuffed Peppers In the Slow Cooker

If you don't have time to bake your stuffed peppers, you can still make this recipe in the slow cooker.

They bake faster than other slow cooker recipes. They will probably be ready in just 4-5 hours on low.

To make stuffed bell peppers in the slow cooker, cook your meat like normal and stuff the peppers with all the ingredients.

Then, put the stuffed peppers in the slow cooker for 4-5 hours on low or 1-2 hours on high. Add the cheese during the last 10 minutes of cooking time.

This will also make the peppers softer and it's a lot easier to overcook them this way. I recommend using the oven.

How Do You Make Vegetarian Stuffed Peppers

It is possible to make vegan stuffed peppers that are also low-carb. Instead of meat, use vegan crumbles that are made of beans and other keto ingredients.

Stuff the peppers with lots of cauliflower rice. This will give it bulk and lots of flavor at the same time.

Instead of cheese, use a dairy-free cheese alternative like Daiya. Please read all labels before you add the dairy-free alternative since they all have different amounts of carbs in them.

What To Serve With Keto Low Carb Stuffed Peppers

These are an entire meal on their own. They have the meat and veggies all in one satisfying dish.

If you want to eat something on the side, you can prepare a plate of cauliflower Mexican rice and maybe even a slice of coconut flour cornbread.

I have a great collection of low carb ground meat recipes if you also happen to have a freezer full to use up. You are sure to find a new family favorite.

Here are some more of my favorite low-carb beef recipes. 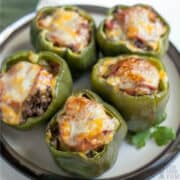 4.83 from 34 votes
A bell peppers stuffed with a meaty filling. They make a tasty keto friendly meal. It can even be made ahead and frozen for an easy meal any time.
Prep Time:15 mins
Cook Time:30 mins
Total Time:40 mins
Course: Main Course
Cuisine: American
Print Pin Review Recipe Save Recipe View Collections
Servings: 6 people
Calories: 243

If you want softer peppers, it's best to boil or blanch the peppers before stuffing and baking. About 10 minutes in boiling water is recommended. Otherwise, they will likely be a bit crunchy. You can also make this recipe in the slow cooker. Just cook the meat filled peppers without cheese in the crock pot for 4-5 hours on low. The cheese can be added at the end until melted, about 10 minutes more.