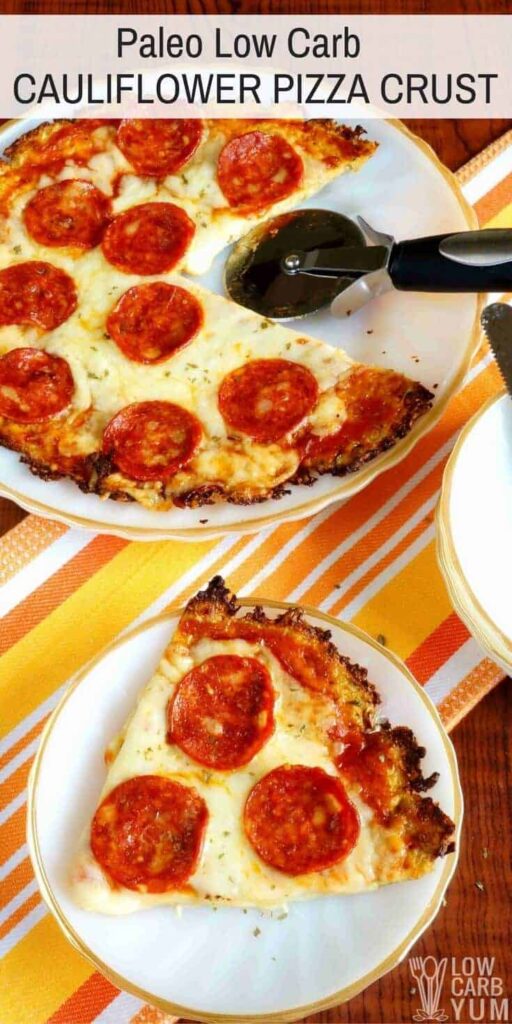 No need to refrain from pizza on a gluten free diet. This low carb cauliflower pizza crust is delicious. Just add your favorite toppings and bake.

In my last post, I described how my 13 year old daughter refuses to eat vegetables of any kind. It should come as no surprise that pizza is one of her favorite foods.

I discovered a low carb pizza crust recipe made from cauliflower that is so good that I had to share.

There is also egg added to hold it together as well as your choice of spices to add flavor.

It's has to be good if my daughter can stomach it without fussing. I've tried other low carb pizza crust recipes before, but they had a funny taste that I just couldn't get past.

I like my crust thin. So when making this recipe, I pressed the mixture down well. The original recipe post did not appear as thin as mine.

In fact, the original recipe states that the crust can be cut and served as bread sticks. I may try that next time. UPDATE: Check out my cauliflower breadstick recipe.

I should also mention that this low carb cauliflower pizza crust can be made ahead and put in the freezer for later. I ended up making two smaller crusts to freeze and one double recipe large crust to eat immediately.

The small crusts fit nicely in an 11" wide vacuum seal bag that fit most vacuum sealer models. The pizza toppings could be added before freezing to make homemade frozen pizzas.

To reheat the pizza crust, I added toppings and then baked at 425 for 10 minutes. I then finished the baking under the broiler to crisp it up. The frozen low carb cauliflower pizza crust is just as good as the fresh one.

Now you can have your own low carb frozen pizza crusts in your freezer. That way, it's super quick and easy to make a yummy homemade pizza any time.

And, this recipe is a fantastic way to get rid of any leftover cauliflower rice you may have. I know I'll be making this low carb pizza crust for many years to come.

It's been a favorite recipe of mine for well over decade now.

Now that riced cauliflower is available both frozen and fresh, it's even easier to make this low carb cauliflower pizza crust! And you can even buy keto friendly frozen cauliflower crust pizza by Read Good Pizza.

I typically top the pizza with mozzarella cheese and pepperoni. But, you can add whatever topping you like. Pepperoni is just the one my family prefers.

If I'm the only one eating the pizza, I like to add some spinach and bacon. Those are my favorite toppings. And, if I can find it, I like to add in some gorgonzola cheese.

You can also make this a white low carb pizza. I've got a wonderful white pizza sauce recipe that would go perfect with this crust.

If want a more something more bread-like, give my coconut flour pizza crust a try! 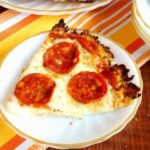