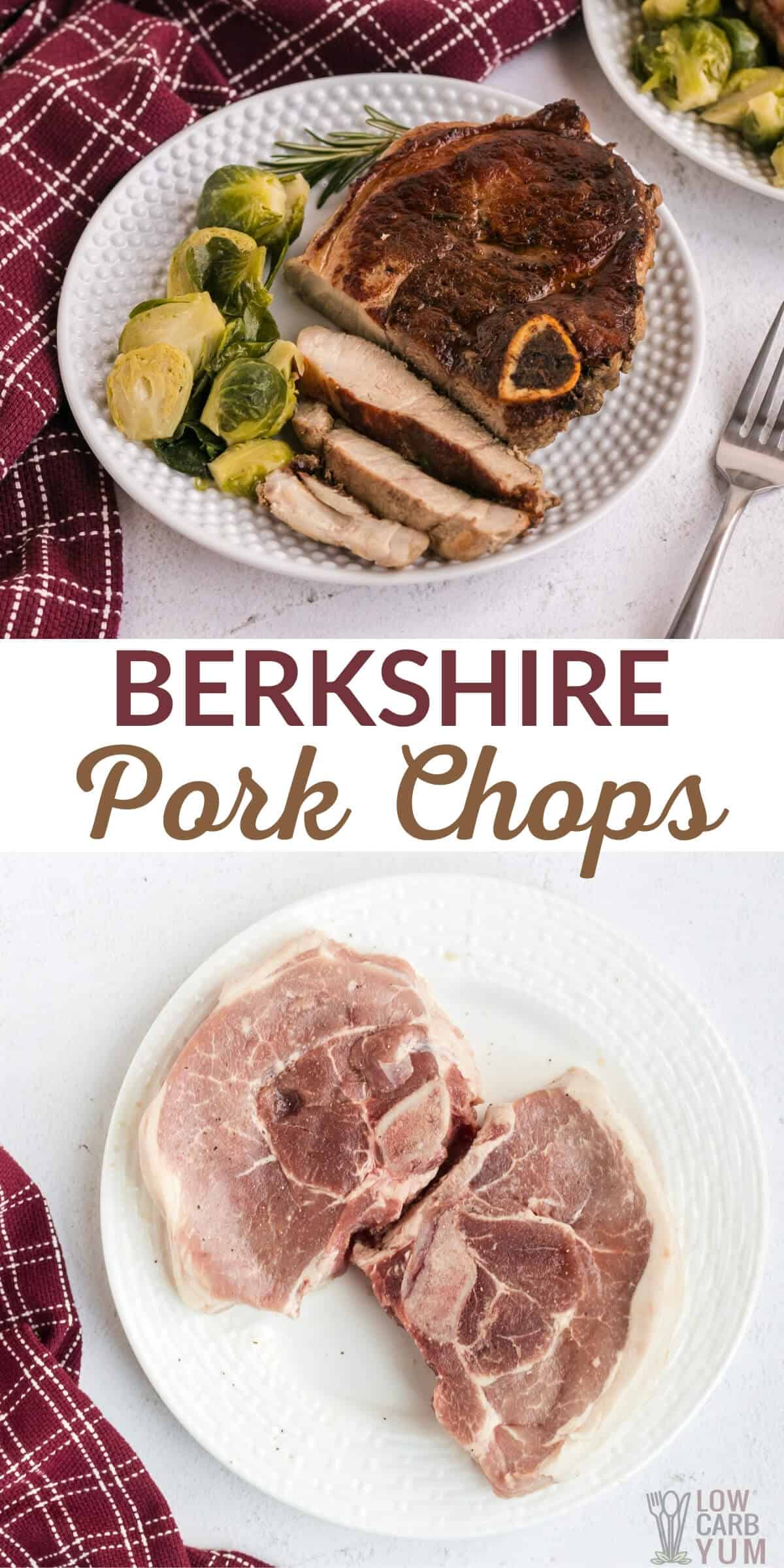 For a restaurant quality main dish, give this simple pan fried Berkshire pork chop recipe a try! It combines fresh herbs and seasonings with a cooking method that keeps the meat juicy inside and crisp on the outside.

What is Berkshire Pork

Berkshire is a heritage breed pig known for it's high quality meat. It's rumored that the pig was discovered over 300 years ago by Oliver Cromwell's army in Reading, a town in the Berkshire County of South East England.

Berkshire pork is prized for its flavor, tenderness, juiciness, and marbling. Even cooking the chops with a simple pan sear or reverse sear steak oven method gives excellent results.

Where to Buy Berkshire Pork

Although many local butchers may sell this heritage pork, it might not be labeled as Berkshire. That's why you may want to buy directly from a specialty pig farm like R Family Farms.

R Family Farms raises their pigs using outdoor reared production practices along with modern technology in Kansas. But you don't have to be local to enjoy their pork products because they have an online store that will ship right to your door.

A few weeks ago, I had a virtual farm tour with Kaden and Emily Roush, the owners of R Family Farms, to learn more about their pig farm. I also got to meet Emily on the Farm Food Tour that was the inspiration for my keto air fryer pork chops.

The R Family pig farm currently has about 1000 pigs with 140 sows. Each sow has an average of 2 to 2 ½ litters per year. The piglets are born and kept inside a climate controlled maternity barn farrowing area until weaned.

After weaning, the pigs are moved to large outdoor deep bedded hoop houses with access to field areas. They get plenty of food and engaging activity with natural enrichment until ready to harvest. That means they are kept happy and comfortable!

At R Family Farms, the meat gets harvested once a month. If you want to learn more about pig farming, I go into more details in my "Where Does Food Come From" post.

My favorite meat cut from R Family Farms is the porterhouse chops. They are so good; they usually sell out within a few days of being in stock.

When cooking pork chops, I like to keep the seasonings simple, so the flavor of the meat comes through. Salt and pepper are all you really need for Berkshire pork, but garlic, butter, rosemary, and thyme are great additions.

Before starting, it's a good idea to take the pork chops out of the refrigerator and allow to sit at room temperature for 15 to 20 minutes. Don't rub on salt and pepper until just before cooking because salt can draw water out of the meat.

The cooking method I like to use sears the meat on the stove then finishes the cooking in the oven. To do this, you'll need an oven-safe skillet, preferably a cast iron pan.

To make the recipe, just follow these easy steps:

How to Grill Porterhouse Pork Chops

I don't have an indoor grill so when the weather is warmer, I prefer to grill Berkshire pork chops outside. Although you can use a simple pork chop marinade like this keto marinade, I usually just season with a little salt, pepper, and garlic powder.

The cooking steps for grilling are very similar to pan searing.

Looking for more easy and delicious keto pork recipes? You'll find some of our family favorites below:

Rosemary has a much stronger flavor than thyme so I like using less of it. However, you can do more rosemary if you prefer. Recommendations (see post for more information):