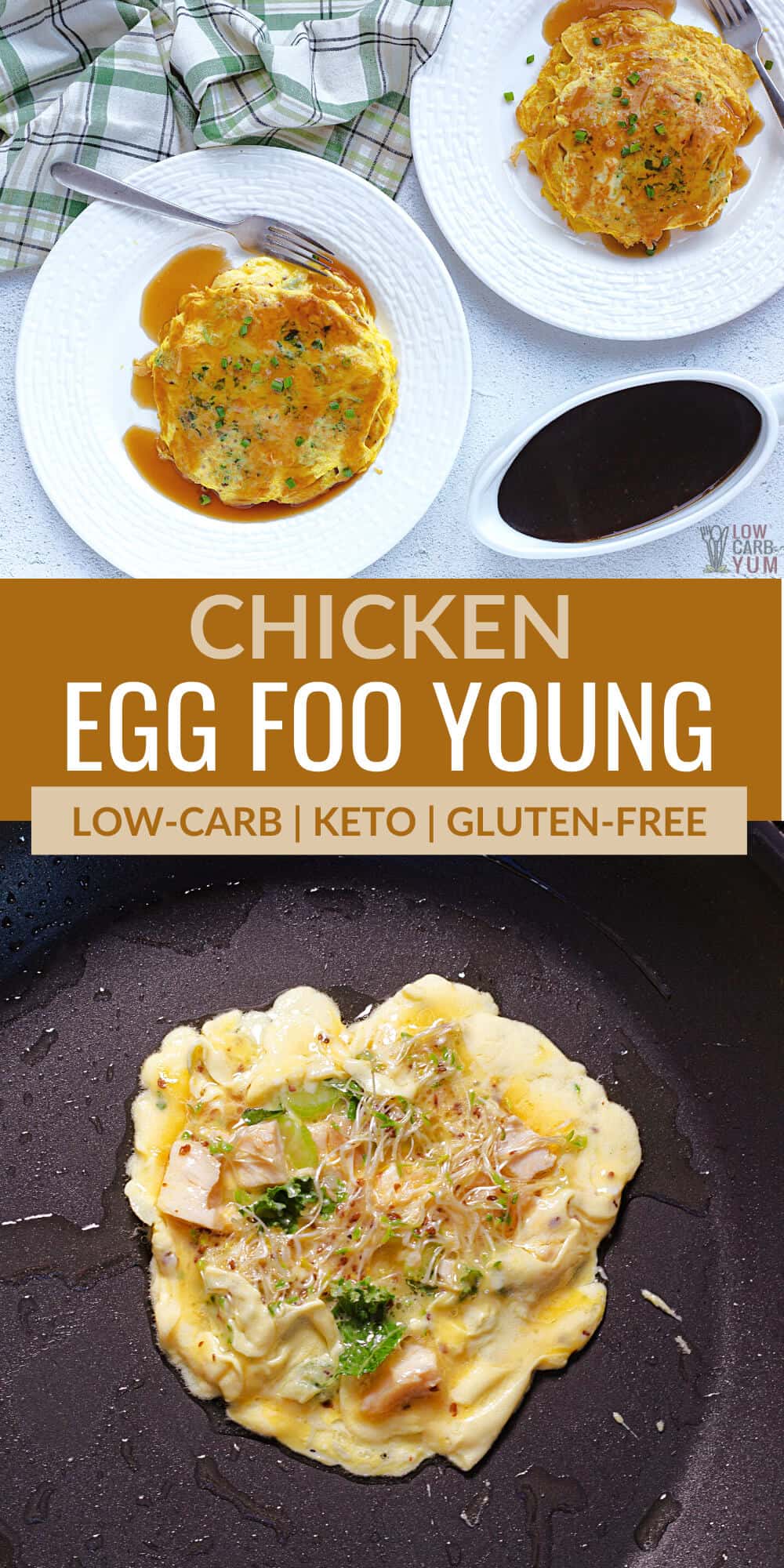 Want to enjoy that leftover chicken for breakfast? Try this easy chicken egg foo young is a recipe. This Chinese omelette dish is made with only 5 basic ingredients. You can also top it off with a simple 4-ingredient gravy as well!

One of my favorite Chinese takeout dishes is Chicken Egg Foo Young with gravy. And if it weren’t for the starch filled sauce, I’d probably still order it when the family orders from a local Chinese restaurant. But since moving to low carb, I’ve learned how to make it keto friendly.

Egg foo young is an Asian dish consisting of eggs used as the binder for pan-fried meat and or vegetables. Although you can serve the dish at any meal, it's usually served in the morning for breakfast or in the evening as a main course for dinner.

This low-carb chicken egg foo young recipe is the perfect way to cut carbs without sacrificing flavor. With this keto-friendly recipe, you can enjoy the popular Chinese American omelette without the unwanted starch.

Each serving has just 3 grams of net carbs after subtracting 1 gram of dietary fiber. Plus, it only takes 30 minutes to make!

There are two parts to this recipe - the omelette itself and the sauce.

For the omelettes, you'll need eggs. cooked meat and vegetables. You can leave out the meat for a a vegetarian version.

When it comes to making egg foo young, the choice for fillings are endless. The dish is a great way to use up leftovers. So if you have some pork or chicken from the night before, just slice it up for the filling.

The same goes for the vegetables. Just use whatever you have on hand. Of course, you’ll want to be sure it’s a veggie that’s low in carbs.

This popular Chinese food that you find on restaurant menus is usually served with a thick gravy. The sauce for the traditional recipe is made with a cornstarch mixture that is very carb heavy. To enhance the flavor of the sauce, sugar is usually added too.

Other ingredients in the egg foo young gravy include chicken stock or broth and soy sauce or tamari. Oyster sauce is also used in many recipes but it contains sugar so it isn't a keto-friendly ingredient.

To make the sauce low-carb, I make it with a little liquid stevia to offset the saltiness of the tamari. But if you use coconut aminos, you may not need any sweetener. I also use just a small amount of xanthan gum as a thickener.

You'll find the full printable recipe card at the bottom of this post. Here, I wanted to provide some photos of each step so you can see exactly how to perform each step.

I use chicken eggs for this recipe, however egg whites, or duck eggs would work as well. You'll just have to adjust for volume.

In a large bowl combine beaten eggs with your filling ingredients. You can use a whisk or fork to beat the eggs first then stir in the meat and vegetables.

There’s no need to deep fry the omelettes. Simply cook them in a frying pan greased with about a tablespoon of vegetable or sesame oil. Then take a large soup ladle or cup to scoop out about a cup of egg mixture for each patty and pour onto the hot pan.

Cook the egg foo young pancakes until each side is golden brown, flipping once or twice as needed. It takes about 3-5 minutes to cook each.

An electric skillet is the best way to cook multiple pieces at once. If using a large skillet, it’s difficult to cook more than two or three in the pan at a time.

While the omelettes are cooking, you can go ahead and start the gravy. Simply heat a mixture of chicken broth, stevia, tamari, and xanthan gum to a boil then remove from heat.

I use Xanthan gum to thicken the egg foo young sauce, but it can be replaced with another low carb thickener if desired.

Chinese restaurants serve the dish with white rice or fried rice. But to keep your meal low carb, I suggest adding one of the following as a side dish instead:

And if you want to add in some more meat, try my keto char siu pork recipe that bakes up in the oven. And Simply So Healthy has a fabulous Orange Beef recipe.

Before getting to the recipe card, I wanted to go over some questions people often have about this chicken egg foo young recipe.

What is egg foo young?

Egg foo young is a Chinese American omelette filled with eggs, meat, and vegetables that’s been deep fried in a layer of hot oil in a wok. They are traditionally served covered in a soy sauce based brown sauce thickened with cornstarch.

What's the difference between egg foo yung and an omelette?

Other than the filling, there’s really not much difference. However, the outside of the Chinese version is usually crisper since it’s deep fried and it is served smothered in sauce.

How many carbs are in egg foo young?

If you leave off the sauce, the carbs in egg foo young are very low. But adding on about one third cup of sauce can add 5 grams of carbs or more. However, my low carb brown gravy adds less than a carb so a serving of omelettes with sauce has only 4 grams of carbs.

Can the recipe be made ahead to freeze?

Both the omelettes and the sauce can be frozen to enjoy later if you want to prepare the meal ahead for an easy meal later. I like to freeze the sauce separately from the omelettes. In an airtight container, both should keep for at least 3 months. But vacuum sealing with keep them fresher longer.

If you enjoyed this recipe, here's a few more keto-friendly Chinese inspired dishes you may want to try next. 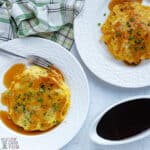 The vegetables and meat can be substituted with any leftovers on hand. For a vegetarian meal, simply leave out the meat. TIPS: Cook over medium heat. If the cooking temperature is too high, the egg patties can burn easily. A temperature that's too low can result in greasy patties that can fall apart. Use small pieces of meat. The cooked chicken should be cut into small bite-sized pieces so your patties don't have large lumps in them. I like to use small cubed chicken in the recipe. Pre-cook certain vegetables. If you include watery vegetables like mushrooms or bell peppers, you'll want to sauté them first so they don't release water into the egg batter as they cook.