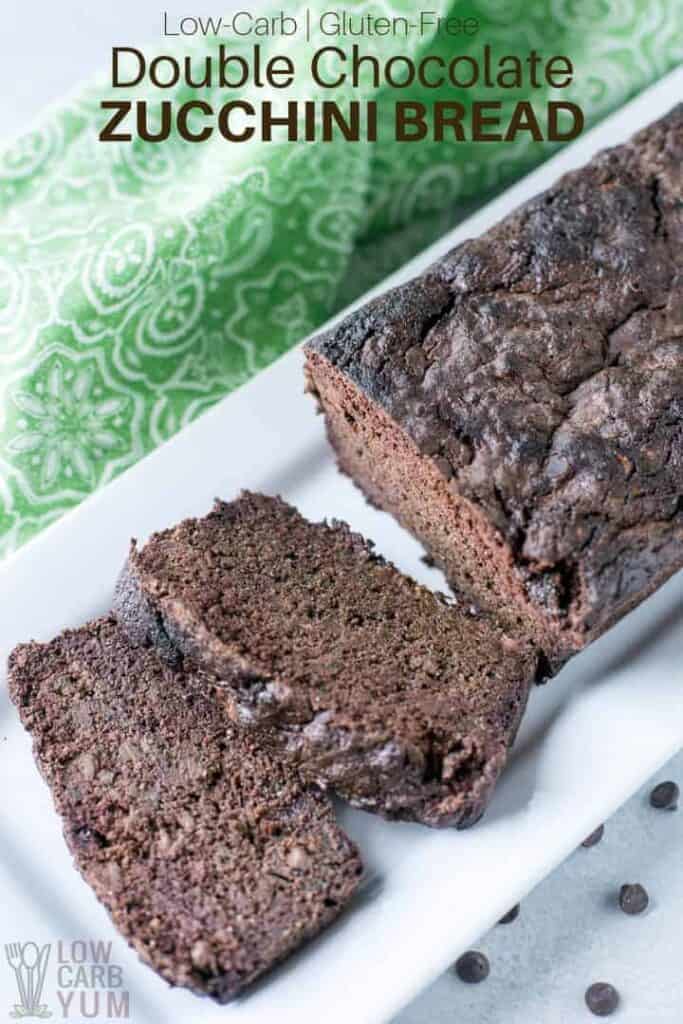 There’s nothing novel about zucchini bread. It’s not a mind-blowing new recipe that’s blowing up the internet. But when you add chocolate to the equation, what you end up with is a doubly decadent treat.

So how do you make an occasional indulgence such as this one much more healthy? You need a few baking ingredients that will taste delicious. And make the bread fluffy. But without spiking your blood sugar.

I’ll share with you how I make this chocolate zucchini bread shortly. First, though, let’s compare apples to oranges. Or more accurately, regular “ZOOK” bread with this version.

The conventional way it’s made contains lots of regular sugar. As a result, there’s 20 grams of carbs in a little slice.

Over half of those grams of carbs come from simple sugars. Simple sugars, I’m sure I don’t need to remind you, elicit a release of the hormone, insulin. The more often insulin is released in your bloodstream to keep blood sugar under control, the more resistant your cells are to the hormone.

Consequently, over time, with more and more simple sugars consumed, your pancreas has to work overtime to keep up with demand.

Your beta cells in the pancreas are then caught in a vicious cycle. They have to keep up with demand by storing AND releasing more insulin.

And at some point, your pancreas throws in the towel and says, “I quit. I can’t handle this anymore.”

As you can see, I’m sugar-phobic. Sure, it’s possible to moderate simple sugar consumption.

However, if you have a sweet tooth like I do, it’s better to just say no.

The Simple Yet Super Amazing Zucchini

Yes, ZOOK is a healthy, nutrient-dense vegetable. However, pouring all that sugar in the bowl negates most of the benefits.

But I’m here to tell you that’s it’s possible to make a delicious alternative without sugar. And not only that, it can still be healthy by making it chocolaty.

So hold on tight because I’m almost about to share with you my recipe for chocolate zucchini bread.

First, though, if you’ll allow me the pleasure of praising zucchini. After all, just take a look at one….

Doesn’t it seem uninspiring and dare I say, even unappetizing?

Eating it raw is awful. It’s shockingly bland. And oftentimes, when you buy one from a supermarket, a day or two later, it becomes a flaccid, soggy, sad squash.

But yet, they can make turkey meatballs absolutely scrumptious.

Ditto for any noodles recipe that you want to make low carb like this peanut Thai-inspired chicken dish.

For a family surprise, I even make nachos with them or stuff them with some zucchini pizza boats!

Oh, the things you can do with this versatile veggie.

To make a low-starch version of this classic sweet treat, you’ll need:

All these above ingredients are very low glycemic. I wish I could offer you a taste of the bread right now, but trust me, it’s just as good as the high-sugar version.

How to make chocolate zucchini bread

The first thing you need to do is place in a large mixing bowl: coconut flour, cocoa, sweetener, cinnamon, baking soda, baking powder and salt.

Quick side note: the term golden sweetener is often interchangeable with the brand name Lakanto, a leading seller of Monk Fruit Sweetener.

Ok, back to the instructions…. Next, blend in the eggs, coconut oil and vanilla until the ingredients are well combined.

After that, fold in the zucchini and chocolate chips. Once that’s done, pour the mix into a greased or parchment-paper lined 9″ x 5″ loaf pan.

A trick you can use to know when it’s ready is to place a toothpick in the center of the loaf. When the toothpick pops out, you’ll know it’s ready.

But it’s not quite ready to indulge yet. First, allow it to cool before you start slicing into low carb chocolate zucchini bread heaven.

We hope you enjoy this tasty chocolate bread! If you’d like to try another tasty sweet loaf, check out this keto chocolate chip bread. You may also like the double chocolate avocado muffins.

Is there a low sugar snack, dessert or treat you’d like to see me bake? What’s your favorite recipe? 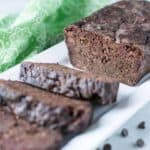 The chocolate chips can be left out if desired, but they give the bread a richer chocolate taste. This recipe can also be frosted to make a delicious chocolate cake.