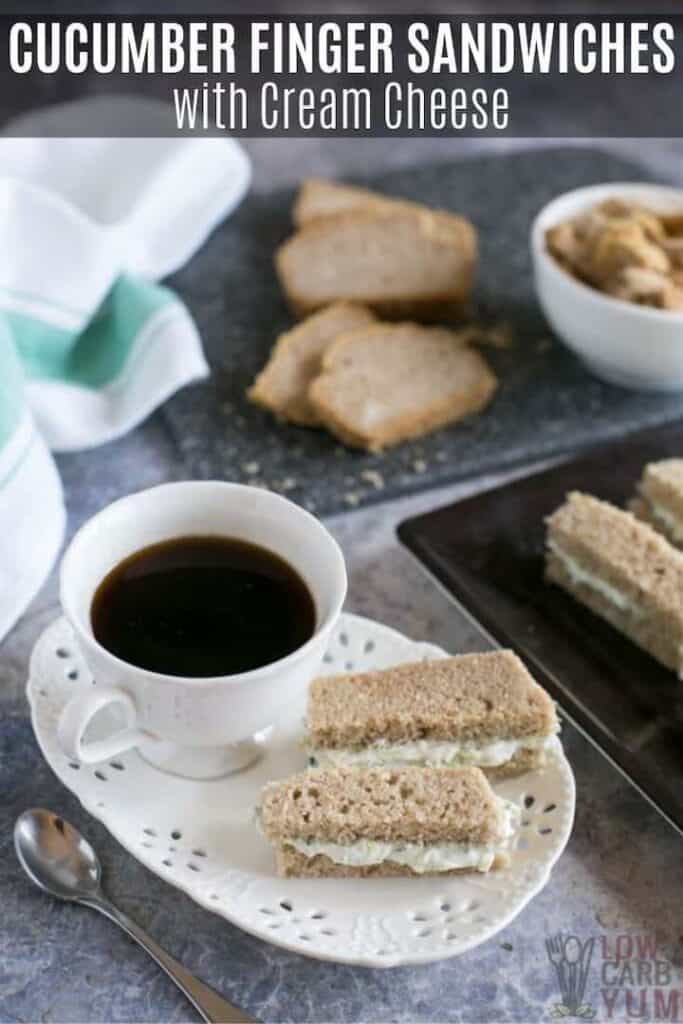 This recipe for cucumber sandwiches with cream cheese is perfect for a tea party. You can even make them with cucumber slices and no bread!

My husband’s great-aunt started an annual summer tea party for the kids. Because there's always great finger foods, even the adults look forward to attending the event.

The finger sandwiches are always a hit. I especially like the ones made with olive and cream cheese.

But this year I decided to make low carb ones with a creamy cucumber filling. Next year I may try using my tuna egg salad as filling too.

The best cream cheese and cucumber sandwiches recipe uses grated cucumber in the filling. But you'll need to remove most of the liquid before using.

You can use any type of cucumber in the recipe. However, English cucumbers are preferred. That’s because they have very small seeds and thinner skin.

I’ve also had success replacing the cream cheese and sour cream with an equal amount of Kite Hill dairy-free spread. So that’s a great option for people who need to avoid dairy.

For the bread in these cucumber sandwiches with cream cheese, I used my almond flour bread recipe. You only need 5 simple ingredients plus salt to make the bread. And because there's just 2 net carbs per slice it's ideal for any ketogenic diet!

I got 14 bread slices from the loaf but I didn’t use the two end slices. Therefore, I was able to get about a dozen finger sandwiches all together with some filling left over.

You can also use any of these keto breads for low carb sandwich recipes:

If it’s not a keto tea party and the guests aren’t all low carb, I like to include some regular sandwiches as well. So I’ll just buy a loaf of bread for those who aren’t following a keto diet.

When making finger sandwiches, I avoid really soft bread as it’s difficult to cut them neatly. Pepperidge Farm sells a thinly sliced white bread that works well for tea sandwiches. Stiffer breads like rye or pumpernickel work great too, but they have a stronger flavor than white bread.

If the bread you have is too soft, you can always lightly toast it so it holds together better.

There’s no need to use bread when making keto cucumber sandwiches. You can make them as lettuce wraps or spread the filling on cucumber slices.

Although these low carb sandwiches are the perfect addition to a tea party, you can enjoy them in other ways too. And they aren’t just for those following a ketogenic diet.

Here are other ways to serve them:

Other Low Carb Recipes for a Tea Party

Tea parties are a fun way to hang out with family and friends. If you’ve never been to one, maybe you should try hosting one. It may just become an annual tradition like ours did.

These are some other keto friendly recipes that are also great for a tea party: 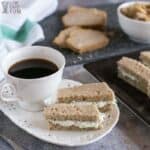