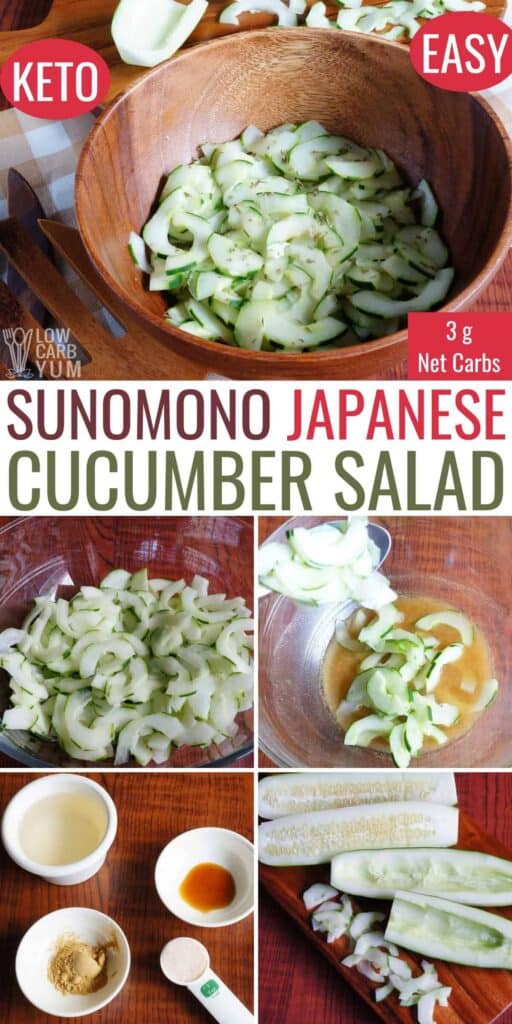 If you’ve ever been to Japanese restaurants, there’s a good chance you were served sunomono before your main course.

This Japanese cucumber salad is a delicious side dish packed with bright, fresh flavors. It’s also a great way to use up extra cucumbers!

Traditionally, the dressing can be prepared several ways. Some use an amazu sweet and sour sauce made with rice vinegar and sugar. Other times, a soy-based ponzu sauce with citrus is used.

But my favorite version is made from vinegar, sweetener, and soy sauce. This easy, tangy dressing has a touch of sweetness that makes sunomono a refreshing light salad to enjoy any time of year.

And by replacing the sugar used in traditional versions with a low carb sweetener instead, it’s easy to make this sunomono recipe low carb and keto friendly!

How to make Sunomono Salad

The Japanese salad is a very simple recipe to prepare. First you prep the cucumbers. Then you make the dressing for the salad.

Your dish is now ready to enjoy! For a nice presentation, sprinkle sesame seeds on top and serve it with keto sushi or miso soup. It's the perfect starter for a Japanese meal like a miso salmon dinner.

If you have leftover cucumber sunomono, you can easily store it. Simply place it in an airtight container in the refrigerator.

The vinegar helps preserve the cucumbers and keep them fresh. Your sunomono should last for up to a week just like my zucchini noodle salad.

If you want to change up the salad to make it more of a light meal, simply add in some protein. Traditionally, crab or octopus (tako) is mixed into the Japanese cucumber salad. This makes it a wonderful light meal that's perfect for summer or as a lunch any time of year.

It's not easy to get octopus in my area so I like to add fish or lobster meat. Some people add imitation crab meat, but that's not a good choice for low carb because there's starch added. A better option is to use meat from large Alaskan king crabs.

Other recipes to try

Cucumbers are a wonderful, versatile ingredient that you can use in all kinds of recipes beyond low carb salads. Check out a few of these favorites: 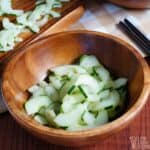 It's best to use English or Persian cucumbers which have a lot less seeds. That way, there's more cucumber left after removing the seeds. Add in some seafood like crab meat, octopus, fish, or lobster to make this salad eat more like a meal.