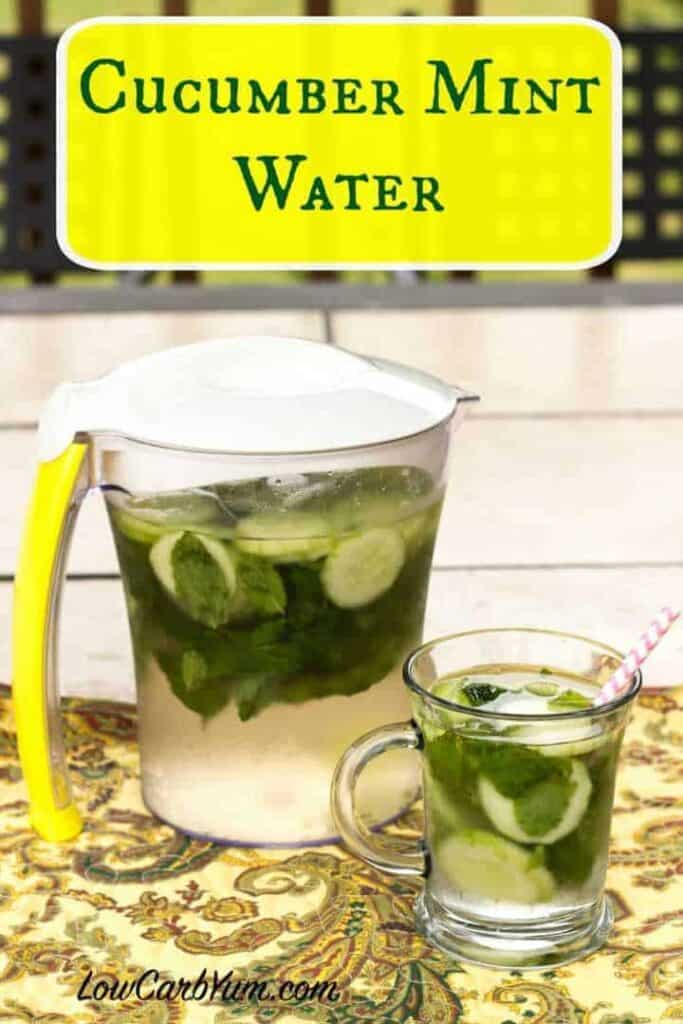 An easy cucumber mint infused water to make a cool and refreshing drink to beat the heat outside. There are no added sugars or sweeteners in this cucumber water recipe.

Getting adequate water is really important and drinking cucumber water is a great way to get added benefits. That's why I started making my own cucumber infused water. And there's practically no calories, unlike drinking my raspberry limeade mocktail!

I discovered cucumber mint water at a family gathering. My sister-in-law told me that her friend makes it and made some for the celbration.

It was just water poured into a jug of mint and cucumber slices that was allowed to sit so the flavor of both the mint and cucumber infused into the water. And it was really delicious without any added sugar or sweetener!

Although you don’t really need a cucumber water recipe, I came up with one to get a consistent taste. But I’m sure that you can vary the amount of ingredients slightly and it won’t make much of a difference.

How to make cucumber mint water

I use store bought mint that comes in a package that weighs about 21 grams. After washing the mint, I remove the mint leaves from the stems and then discard the stems.

Then, I place the leaves into a 2 quart water pitcher and mash them up a bit with a wooden spoon. Mashing helps release the mint flavor into the water.

I like to use a long English cucumber that's peeled and sliced. I try to cut the cucumber as thin as possible using a knife.

Then I dumped the sliced cucumbers over the mint in the pitcher. The next step is to just add cold water.

Once the water was added, I stir it a bit with the wooden spoon. A mix of water and ice can be added for colder cucumber water. The mixture needs to sit for at least 15 minutes before drinking, but the longer it sits, the better.

I recommend letting it sit for an hour or two before serving. This cucumber mint water definitely hits the spot on a hot summer day!

I’m providing the recipe I use, but it’s really just general guidance with plenty of room to make modifications. And if you don’t like the taste of mint, feel free to replace it with something else.

Here’s a list of ingredients that can be added to cucumber water with or without the mint:

They do sell pitchers and water bottles with a built in center for adding fruits and such to make infused water. You can use one of these if you’d like, but they aren’t necessary for making infused water recipes.

I actually like to scoop some of the infused ingredients out of the water and put it in my glass. Once I’m done drinking the water, I’ll snack on the infused fruit like these cucumbers.

What are the benefits of cucumber water?

There are some amazing health benefits of cucumber water. So it's a great beverage to add to a low carb keto diet.

Thirst is often confused with hunger so sipping on water will aid in weight loss. And drinking cucumber infused water can fill you up with almost no calories. Plus it has a nice flavor to satisfy the taste buds!

Cucumbers are also low in carbohydrates and high in antioxidants. And they contain essential nutrients and vitamins such as:

A study in the Journal of Cancer Research found that the flavonoid fisetin may slow down prostate cancer progression. Cucumbers are a source of this flavonoid. And strawberries contain high levels so blending them in increases the benefit.

Cucumbers are rich in vitamin K. This vitamin is needed to help form proteins used to make healthy bones and tissues. It's also a nutrient that's important for blood clotting and heart health. However, to get the most benefit you'll need to keep the peel on the cucumbers!

With all the health benefits of adding cucumbers into your food, you'll want to try other ways to incorporate it into your regular routine! Below are some of my favorite cucumber recipes:

And for another refreshing low carb drink for summer, take a look at my fresh squeezed lemonade!

The following kitchen items were used to make the recipe: 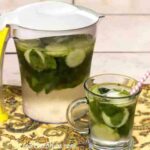 To get the most health benefit, it's best to leave the peel on the cucumber as it contains nutrients. Let the mixture sit for several hours to ensure enough flavor has infused into the water. Any of the following can be added to or used in place of the mint: The cucumbers in the water are great to snack on too!