When I first made the sugar free chocolate mousse recipe posted here, I knew it would make a great filling for a low carb chocolate pie. However, I wasn’t sure what crust recipe to use.

Originally, I was thinking to use a chocolate crumb crust like the one in this cookies and cream cheesecake. But, I decided against having so much chocolate in the pie.

While looking at recipes for crust made with coconut flour, I got the idea to just make a toasted coconut pie crust out of unsweetened coconut. Using the concept of your typical crumb crust, I added a bit of stevia and melted butter to about 2 cups of flaked coconut.

I pressed the mixture into a sprayed pie plate and baked until the coconut was toasted a golden brown. The amount of mousse needed for the pie was about one serving less than double the recipe.

I just put what didn’t fit in the pie crust into a single serving dish. The important thing to remember when making this keto chocolate dessert is to use powdered erythritol or Swerve Confectioners in the mousse filling.

If you use too much granular erythritol, it may crystallize and become crunchy in the finished product. That’s why it’s always good to play it safe by using a powdered erythritol product.

I’ve tried using a coffee grinder to powder granular erythritol, but it still ends up being a little crunchy in this type of recipe. If anyone has a secret to making powdered erythritol at home, please post the information in the comments.

To cut back on the amount of erythritol used, I often add in concentrated stevia powder or liquid. It’s also more economical to use a concentrated sweetener as a little bit goes a long way.

In fact, I opted to use the stevia powder in the toasted coconut pie crust. It dissolved right into the melted butter and became evenly distributed into the unsweetened coconut flakes.

This low carb chocolate dream pie is delicious and truly a dream come true. I guarantee you won’t be disappointed with this recipe if you like both chocolate and coconut. Toasted coconut can be sprinkled on top of each slice, if desired.

If want another great crust recipe to use with low carb mousse, try my peanut crust. The peanut butter flavor goes well with a rich chocolate filling. 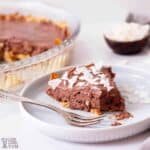 Carbs per slice: about 6 g 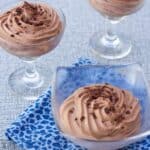 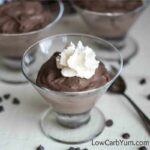 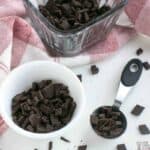