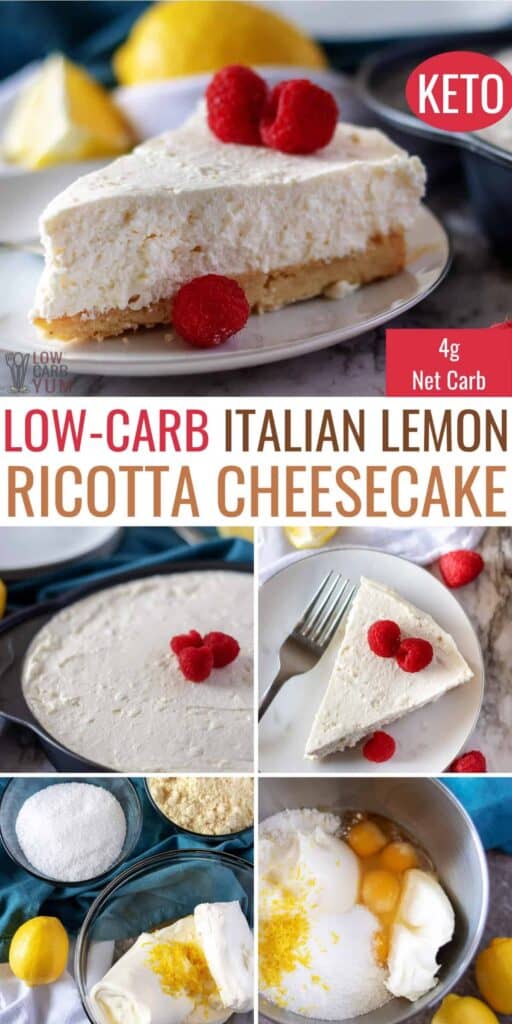 This keto-friendly Italian Lemon Ricotta Cheesecake has a sweet, tangy flavor and rich, creamy texture that is simply irresistible! It’s also easy to make and only has 4 net carbs per slice.

Cheesecake can be a great keto dessert. As long as you use a low-carb sweetener, the rest of the ingredients are very keto-friendly!

It’s a delicious dessert that is always sure to please a crowd. It feels like indulging even when you’re not.

If you love this rich, delicious dessert as much as I do, you have to try my Italian lemon ricotta cheesecake!

The fresh, bright flavor of the lemons combined with the rich, creamy texture makes this treat irresistible. It’s the perfect balance of sweet and tart that makes you keep going back for more!

And you’ll never guess how simple it is to make. After you prebake the crust, you’ll simply whip the heavy cream, mix the rest of the ingredients until smooth, fold them together, then pour into the crust and allow to set in the refrigerator.

This Italian inspired variation of cheesecake is so delicious, it’s sure to be a hit with any crowd!

How to make a keto lemon ricotta cheesecake

Prepping your cheesecake is as easy as mixing together the ingredients! This is a very straightforward, simple recipe.

Next, we’ll combine the filling ingredients and allow the cheesecake to set:

Your low carb Italian ricotta cheesecake will be ready to enjoy! I like to slice mine into 16 slices, which come out to 4 net carbs per serving.

What is Italian cheesecake

The cheesecake usually served in the US is a New York style cheesecake. If you’ve ever had cheesecake at a restaurant or party, it was probably this style.

Italian cheesecakes will be a bit lighter and fluffier. New York style cheesecakes are known for being very heavy and dense due to the cream cheese.

For this lemon ricotta cheesecake recipe, I like to combine cream cheese and ricotta. You get the best of both worlds! The result is rich and tangy with a beautiful, creamy texture.

If you like cheesecake, you’re going to love this keto version made with ricotta.

Making sure your cheesecake sets

If there is too much liquid in your filling, your cheesecake will not be able to set properly.

Most excess liquid will come from the ricotta. Before mixing the filling ingredients together, it’s best to strain the ricotta with a wire mesh strainer or cheesecloth.

You could also strain the filling after you’ve combined it, before pouring into the cooled crust.

If you try this recipe and the cheesecake does not set, you may not have strained the filling properly.

Can’t get enough of rich, creamy, low-carb cheesecake recipes? Check out a few of these favorites:

You may want to give this keto strawberry cheesecake a try too! 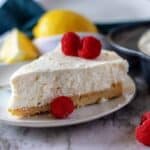 Try using a chilled mixing bowl when whipping the heavy cream, it will speed up the process. If needed, strain the filling before putting it into the cooled crust. Make sure to let the cheesecake chill for at least 4 hours so it can set before serving.