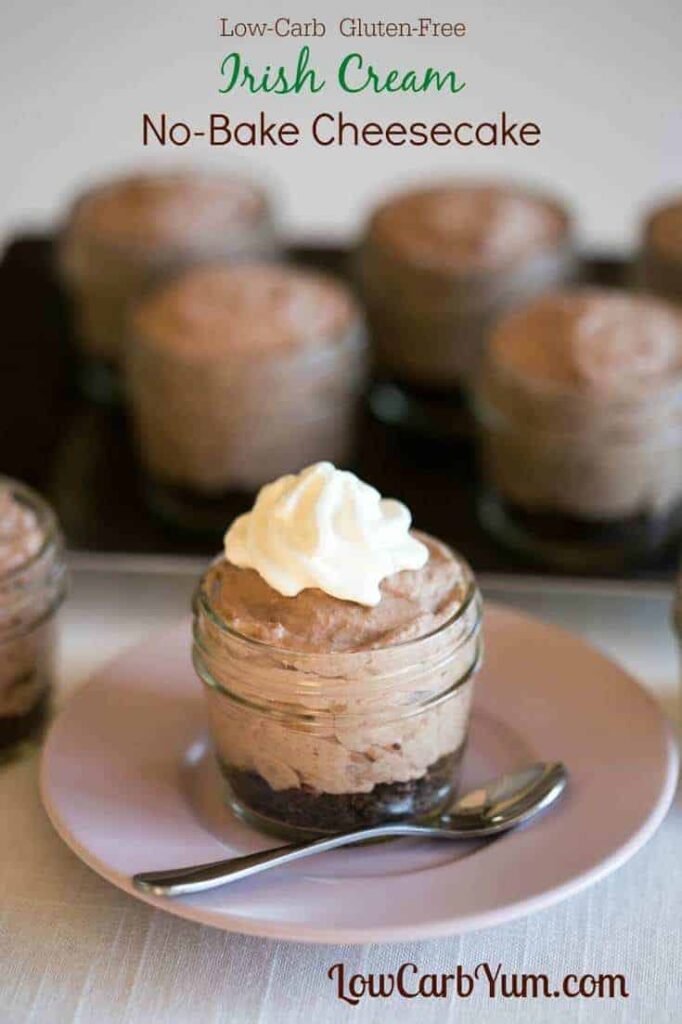 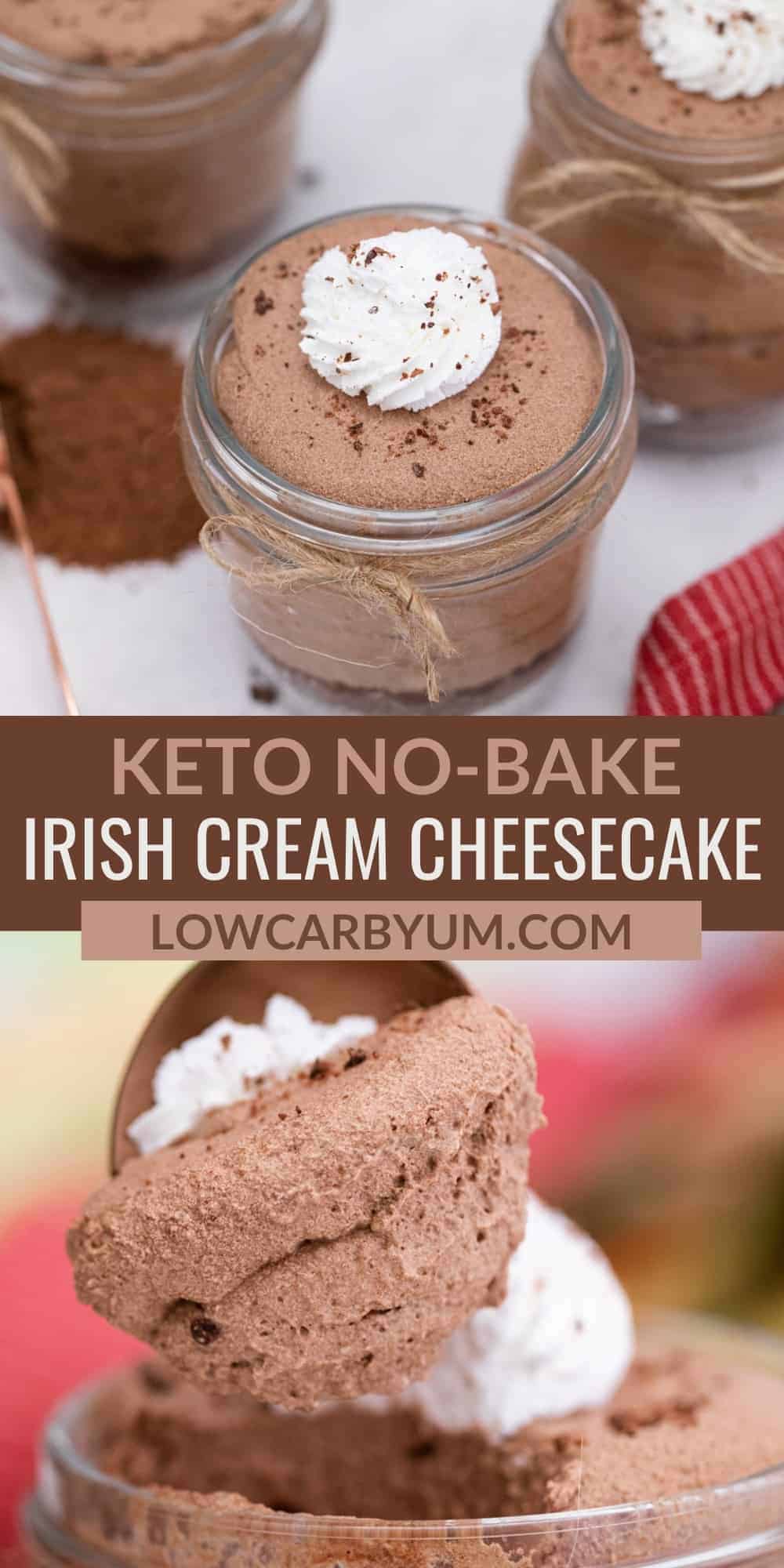 Coffee and chocolate lovers will appreciate this easy to make no bake Bailey's Irish cream cheesecake recipe. It can be made in small jars or a pie pan for an easy St. Patrick's Day dessert.

I was looking for an easy dessert to make for our St. Patrick's Day celebration. My original thought was to bake a cheesecake. But, there's only a few of us and I didn't want tons of leftovers. So, I opted to make some mini cheesecakes.

Last week, I made a keto Irish cream that's much lower in carbs than the regular liqueur. I thought why not make a no bake Irish cream cheesecake in jars similar to my no key lime bake cheesecake recipe. This way, I could manage portion sizes best.

There isn't a lot of liqueur in each serving. It's only about half an ounce which is so little that you can barely taste the alcohol. The Irish cream taste is there with a lot of the chocolate flavor and a hint of coffee.

The recipe is super simple and it can be easily modified if you don't have any keto friendly flavored liqueur.

If you've made other no-bake cheesecakes, you'll find the ingredients in this Bailey's Irish cream cheese recipe are similar.

Note: The full list of ingredients with amounts is available in the recipe carb below.

For a true cheesecake flavor, you need to add real cream cheese. Full fat is recommended for those on keto but you can use a lower fat cheese as long as the carbs are 1g or less per ounce.

Whipped cream lightens up the texture of the unbaked cream cheese filling. I like to use heavy whipping cream because it has a higher fat content. You can also use double cream which has even more fat.

If you aren't following keto, it's fine to use Bailey's in the recipe. Otherwise, you'll want to use a homemade Irish cream made without sugar. You can also use a flavor extract.

Unsweetened cocoa powder is also added to the filling and the crust. If you want to enhance the coffee flavor, you can add some instant espresso or coffee powder.

Both the filling and the crust add butter for flavor and texture. The butter is what binds the no-bake crust together.

You'll need a finely ground nut or seed flour for the crust. I like to use almond flour but hazelnut or sesame seed flour would work too.

To stabilize the filling and prevent it from going flat, a little bit of gelatin is added. If the cream cheese contains a stabilizer like xanthan gum, you may be able to leave the gelatin out.

Please refer to the printable recipe card below for the full instructions to make this Bailey's cheesecake.

The recipe is really easy. First you prepare the chocolate almond flour crust then top it off with the cream cheese filling. That's it!

For the crust, I used a scaled down version of the one used in my no bake peanut butter cheesecake recipe. It was just enough for my eight little mason jars.

To make it, just combine the almond flour, cocoa, sweetener, and melted butter in a bowl. Then press into small serving jars or one pie plate.

The filling is a blend of softened cream cheese, butter, cocoa, sweetener, and flavorings. To lighten it up, you fold in stabilized whipped cream. This makes it airy like a cheesecake mousse.

The filling can be spooned or piped on top of the crust if making in jars. Otherwise, you'll spread it over the pie crust with a rubber spatula.

You can dress up the Bailey's Irish cream cheesecake by topping it with whipped cream and some shaved or chopped chocolate. If serving for St. Patrick's Day, you can even dye the whipped cream green.

If you want to top each off with whipped cream and store in the refrigerator, you'll need to stabilize the whipped cream with a little gelatin first. This prevents it from returning to the liquid state and going flat.

The filling should be enough to fill a pie shell as well, but you may need to double the crust ingredients to fill out the bottom of the pan. I like the individual servings better because I tend to go for larger slices than I should with a pie.

The mini cheesecake in-a-jar servings are perfect for parties when made in disposable cups. You may even want to up the liqueur for serving at adult parties or to ring in the new year.

Before getting to the Baileys cheesecake recipe, I will address some common questions about making this no-bake cheesecake.

What can you substitute for Irish Cream?

As mentioned above, you can use a teaspoon or two of Irish cream flavoring or extract instead of the liqueur. You can also use 2 tablespoons whiskey and 6 tablespoons heavy cream in place of the half cup of Irish cream.

How should leftovers be stored?

The cheesecake should keep for at least 4 to 5 days in the refrigerator. For longer storage, it will last for at least 3 months in the freezer.

Do you prefer baked or no baked desserts? I like them both. Be sure to check out more of these easy low-carb cheesecake recipes.

When whipping cream, it whips up better if it's chilled. It also helps to whip it in a chilled mixing bowl. Allow the gelatin to absorb the cold water and swell in size before adding the hot water. The softened gelatin should then dissolve completely after the hot water is mixed in. 2 tablespoons whiskey and 6 tablespoons heavy cream can be used in place of the half cup of Irish cream. The cheesecake should keep for at least 4 to 5 days in the refrigerator. For longer storage, it will last for at least 3 months in the freezer.