Paleo almond butter bread is possibly the BEST keto bread recipe ever! The texture is light and fluffy just like wheat bread. But this easy to make recipe is flourless, low-carb, gluten-free, and made with only 5 ingredients!

When moving to a low carb diet, most people don't want to give up breads. That's why I've been looking into more low carb recipe options. My latest creation is a keto friendly paleo bread made with almond butter.

I've done a ton of baking over the years with almond flour and coconut flour. And many of my recipes use a combination of both flours. That's because I find it's comes the closest to using wheat flour.

The issue I have with bread made with almond flour is that the texture tends to be heavy. And bread made with coconut flour can be dry or a bit eggy. So I experimented with a simple recipe using only almond flour so I could get a light and fluffy loaf without using too many eggs.

Why use almond butter instead of almond flour for keto bread?

With almond butter, the nuts have been processed until the oils are released. Therefore, baked goods tend to have a lighter texture than those made with almond flour because no additional fat is needed. The pieces of almond in the butter are also much finer than the flour.

How to make a paleo bread with almond flour

What I love about this recipe is that it comes together quickly with minimal ingredients. Simply blend the egg yolks into the almond butter, then mix in the whipped egg whites, baking soda, apple cider vinegar, and salt.

If the almond butter has salt in it, omit the salt so the loaf isn't too salty. And be sure to choose a butter without any added sugar.

The recipe makes one 8x4-inch loaf. I like to use a silicone loaf pan so the bread releases easily. However, a lightly greased parchment paper lined pan works just as well.

Why use almond butter instead of almond flour for keto bread?

With almond butter, the nuts have been processed until the oils are released. Therefore, baked goods tend to have a lighter texture than those made with almond flour because no additional fat is needed. The pieces of almond in the butter are also much finer than those in the flour.

I don’t recommend keeping it out at room temperature for more than a day or two. If kept in the refrigerator, the loaf should last at least a week or two.

But wrapping it well and freezing will allow it to keep for at least 3 months. A frozen loaf can be thawed in the refrigerator or slices can be toasted as needed.

Is there any bread that doesn’t have carbs?

Unfortunately, it’s impossible to make bread with zero carbs. The lowest I’ve seen is oopsie rolls with just 0.6 grams of net carbs each. Even my popular nearly no carb bread made with pork rinds has one gram carb per serving due to the egg and cheese.

Once you master this easy brown bread loaf, you may want to change it up a bit. So I’ve come up with a few suggestions to try.

Ways to serve the brown bread

Although the slices are perfect for making sandwiches, that not all you can do with them. Lets look at some other ideas: 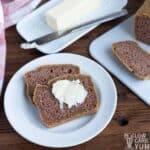 The recipe can be made in one bowl if the eggs aren't separated. However, whipping the egg whites separately should result in a fluffier loaf. If the almond butter contains salt, it's best to omit the added salt to avoid a loaf that's too salty.