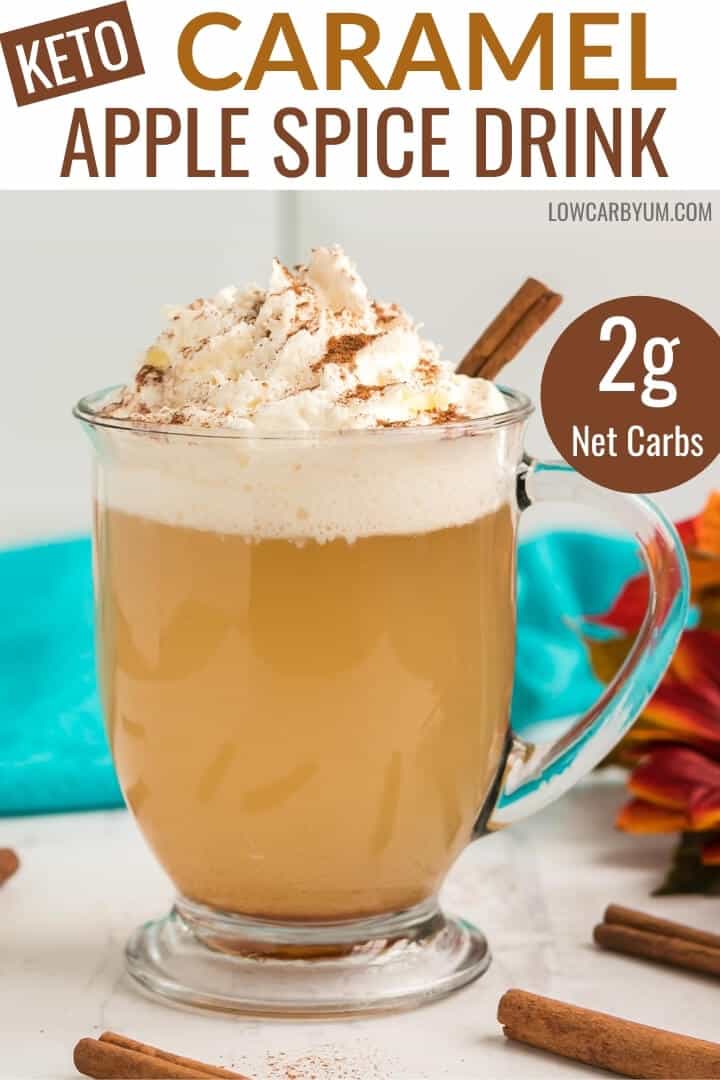 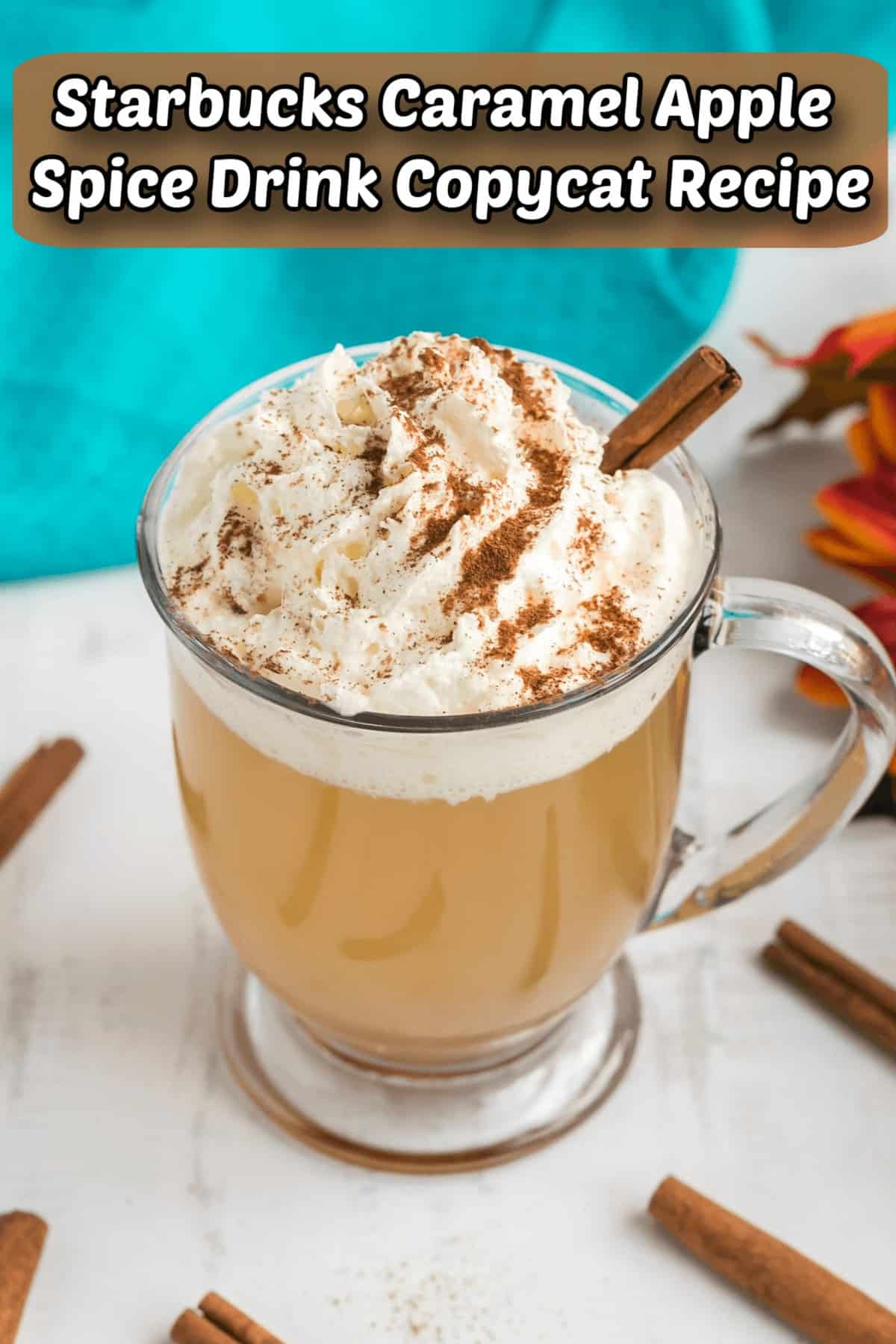 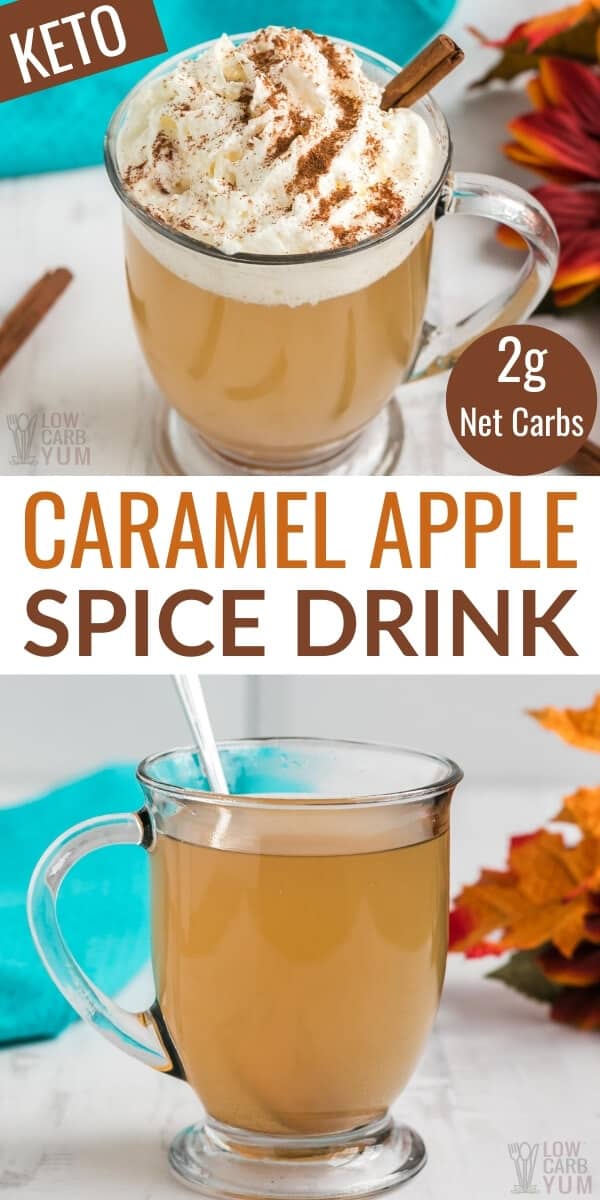 Indulge in a low-carb keto version of the Starbucks caramel apple spice hot drink. Make it at home and save money and carbs! This post is sponsored by ChocZero.

Caramel apple spice has a very "fall-like" flavor. It reminds me of an apple pie a la mode mixed with a cup of coffee.

You taste all the apple pie flavors - the sweet steamed apple juice with the cinnamon spice and drizzled with caramel.

If you have a sweet tooth, this is probably what you crave.

All of that adds up to a lot of carbs! Thankfully, there is a way to create this tantalizing drink in a way that gives you all the flavor without all that extra sugar.

There are a whopping 35.1 grams of carbs in an 8-ounce Starbucks caramel apple spice hot drink without whipped cream. That's in just 8 ounces!

This is why I knew I wanted to create my own low-carb copycat recipe using ChocZero's caramel syrup. When you are trying to stay between 30-50 grams of carbs per day, you can't just survive on one hot drink.

I made quite a few changes to this drink - but all I did was make keto-friendly swaps with things that taste the same. My drink recipe only has 2g net carbs per cup. That is quite a huge decrease!

One sip of this drink and you won't be able to tell that it isn't from Starbucks!

The entire recipe is at the bottom of this post. First, I wanted to answer some questions about this copycat keto Starbucks drink.

Apple cider vinegar is commonly used to make keto apple cider. The sugar-free syrup in this drink offsets the taste enough that it just tastes like a rich apple drink.

You can't even tell it has vinegar in it.

Does Caramel Apple Spice Have Coffee In It?

No, this drink is more like a hot apple cider drink than a latte.

The original Starbucks drink is made with steamed apple juice, cinnamon syrup, and whipped cream. It's a decaffeinated drink that is perfect for anyone that wants something hot but doesn't like coffee.

Can You Use Cinnamon Apple Spice Tea Bags?

My recipe has a blend of spices that includes:

I absolutely love this combination of spices, especially in this drink!

Yes, you can use a pre-made cinnamon apple spice teabag instead of all my spices. But, be careful and only pick out tea bags that don't have any added sugars. Most teabags don't have sugar, but it is always good to double-check.

How Do You Dry Orange Peels For This Drink?

The easiest way is to just use a bag of dried orange peels. It's faster, but it's not cheaper.

To save money, dry your own orange peels. It's really easy!

After you make your own dried orange peels, store them in an airtight container in your pantry.

They will stay fresh for up to a month.

How Do You Strain The Spices?

Do not just stir all the spices into the boiling water. This will make your drink taste way too strong and bits of the spices will be floating in the water.

Instead, use a tea filter bag or mesh tea ball.

The tea filter will hold everything better. The mesh tea ball is nice, but you'll have to break up the cinnamon sticks in small pieces to get them to fit.

How Many Servings Does This Recipe Make?

This recipe will make enough for 2 cups. It's best to make it all in one mug that can hold at least 16 ounces of liquid so that you can stir it all together and let the spices meld together.

This recipe uses ingredients you probably already have at home. If you have a well-stocked spice rack, then you should be set.

What To Eat With A Starbucks Caramel Apple Spice Drink

Since this drink is packed full of delicious spice we all love during the fall season, I highly recommend enjoying this drink alongside a slice of low carb pumpkin pie or a gluten-free spiced zucchini muffin!

Definitely save this recipe for those chilly autumn mornings when you feel like having a Starbucks treat right in your own home. For more apple cinnamon flavor, pair it with a slice of keto apple bread or keto apple crisp.

Want a few more low-carb drink recipes to enjoy in fall? Here are a few of my other favorites: 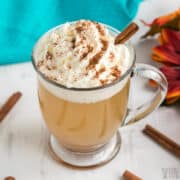 A pre-made Winter Spice Herbal Tea bag can be used in place of your own tea blend if desired. If you don't have any cinnamon sticks, ⅛ teaspoon cinnamon can be added instead. Raw or unfiltered apple cider vinegar will provide the needed taste as it has the protein strands remaining that contain enzymes, minerals, and probiotics.  Whole cinnamon sticks are best: You might be tempted to use dried cinnamon, but it doesn't have the same flavor. Use whole cloves: The whole cloves will have a stronger taste and fill your water with more spice than if you used dried cloves. Jarred allspice is better than homemade: Allspice is actually a berry from a tree in Jamaica. The flavor tastes like a combination of cinnamon, cloves, and nutmeg. I used all of those spices in this recipe, so it's best to use the allspice instead of doubling up on the other spices.