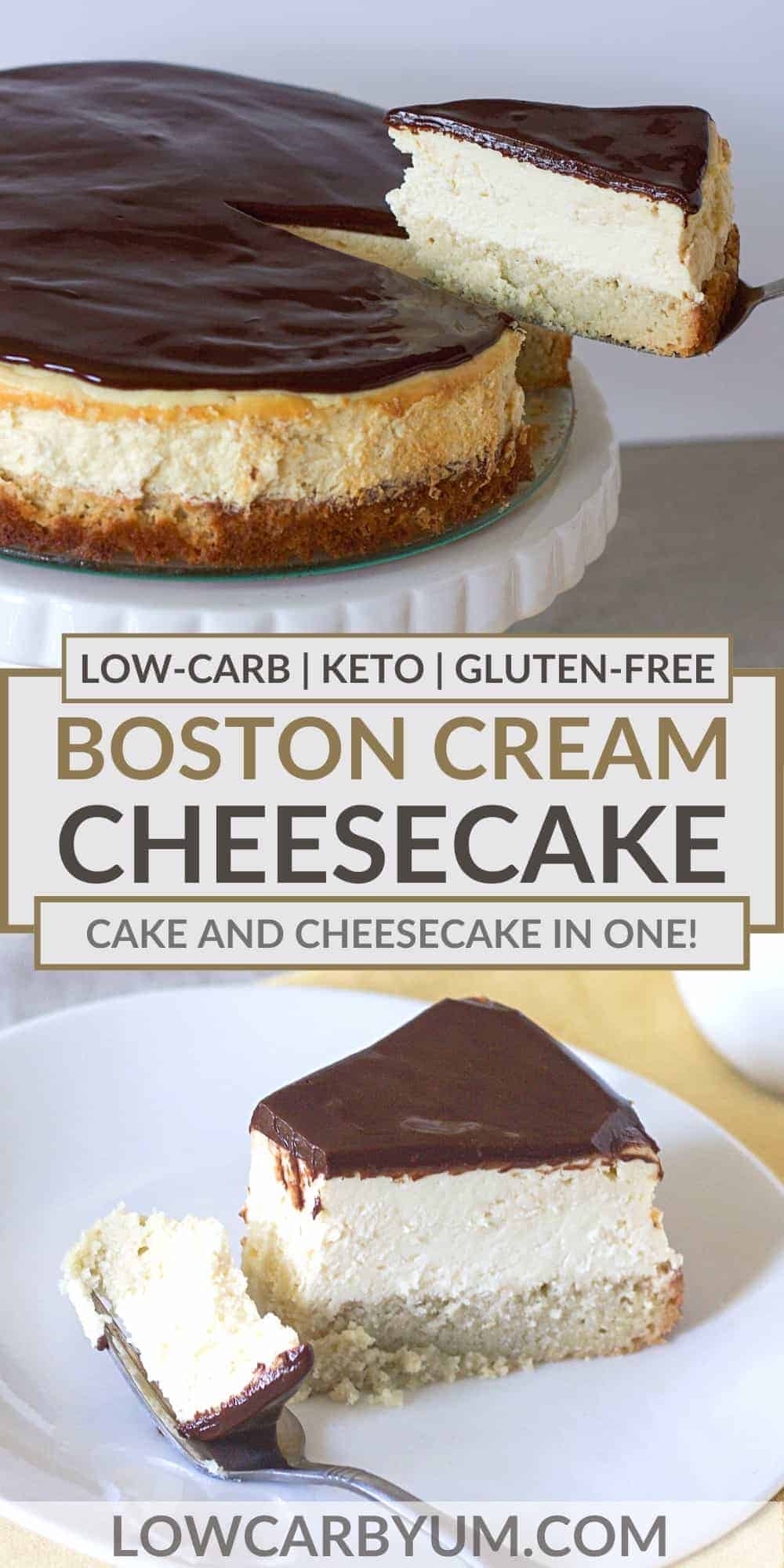 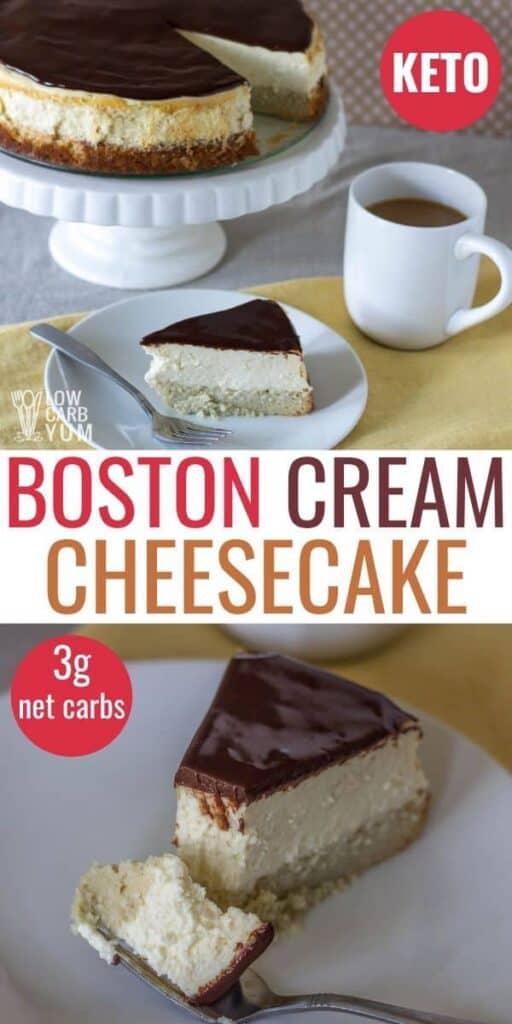 Here's a recipe for a fabulous keto Boston cream pie cheesecake that bakes up in no time. It's got a layer of gluten-free cake topped with cheesecake, then a layer of chocolate!

I'll admit- I have a huge love for Boston cream donuts and I have not yet attempted to make low-carb ones. I'm not really sure how you would get the light airy donut that's needed to fill with the traditional vanilla custard.

But, that hasn't stopped the cravings!

Donuts have been my only experience with Boston cream as I've never eaten the pie or cake. Then, I saw a recipe for Boston cream cheesecake in a Better Homes and Garden cookbook that was low-carb and gluten-free, and I thought it would be easy to make. I was right!

Whether the sunshine is out and I'm making some fathead pizza on the grill using my homemade low-carb pizza sauce or making hearty lobster bisque, this cheesecake recipe is the perfect dessert.

Listen- It's always a good time for cheesecake!

I had some time to make this low-carb, gluten-free Boston cream cheesecake and it is amazing. It looks a lot more complicated than it really is so don't be afraid to try it. It's so easy to put together!

Trust me, even if you don't think you enjoy baking, you will have fun making this low carb cheesecake.

There are three parts to this recipe - the cake (or crust), cheesecake, and chocolate topping.

Here's what you need:

For the cake, I used a combination of almond flour and coconut flour. You'll also need some butter, your favorite sugar substitute, almond milk, and other cake ingredients.

For the cheesecake layer, I used a combination of both cream cheese and sour cream with some sugar substitute, eggs, and vanilla extract.

For the top layer, I melted some low-carb dark chocolate and mixed it with some heavy cream and butter.

How To Make Boston Cream Cheesecake

This is not a quick recipe, but it is worth every minute. Most of your time is spent waiting for the cake to bake or cool off, so it's not really that difficult at all.

This is a layered cheesecake with a gluten-free cake at the bottom rather than a crust. The cake needs to be baked fully before putting the cheesecake layer over the top.

After about 25 minutes in the oven, the cake should be done. Then, it's time to whip up the cheesecake batter, which is a creamy mix of cream cheese, sour cream, eggs, vanilla, and sweetener.

Some may argue that this really isn't a Boston cream pie because the famous vanilla cream is missing. Well, that is true because it's replaced with a vanilla flavored cheesecake instead.

Pour the cheesecake mixture on top of your baked gluten-free cake and bake it for another 50 minutes. You'll know it's done when the outside edges appear set when you gently shake the pan.

It may not have any custard, but it still incorporates all the flavors and ideas of the Boston cream pie. And, cheesecake is as delicious if not better than custard, right?

To make the chocolate glaze, I used a whole 3-ounce bar of Lily's dark chocolate. I find the prepared chocolate works much better than trying to make one with your own low-carb sweetener and cocoa or unsweetened chocolate.

Add a few spoonfuls on top of the cheesecake and spread it out into a thin layer using a spatula or spoon.

What To Serve With Keto Cheesecake

I love to eat this cheesecake just like it is!

Sometimes, I will enjoy a hot cup of bulletproof coffee or dark roast french press with keto creamer to serve alongside it. This is such a filling and rich dessert that you might not have room for much else.

Before we get to the recipe card, here are some questions people have asked about the recipe.

How do you know when the cake layer is finished baking?

You'll know the cake is completely baked when you insert a toothpick and it comes out clean.

How many slices does this recipe make?

Since this is a pretty rich cake, cutting the whole thing into 16 slices will keep the portion to a size that keeps calories and carbs within reason. Each thin slice has about 3g net carbs!

Can you freeze this Boston cheesecake?

Most cheesecakes freeze well, and this one should be no different. If you aren't taking this to a party to share or have a large family that will eat it, you probably want to freeze the individual slices to enjoy later.

This three-layered keto cheesecake really does end up resembling a Boston cream pie! It might take a bit longer to make than other recipes, but the result is definitely worth it.

Other Dessert Recipes To Try

If you enjoyed this keto Boston cream pie cheesecake, here are some more keto cheesecake recipes that you'll enjoy next. They are some of my favorites! 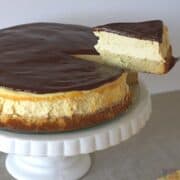 Use a springform pan. This makes the entire process a lot easier. The sides will have to be greased well if it's not a good non-stick surface. If your cheesecake sticks to the pan, use a knife. The sides of my cheesecake did stick a bit to the sides, but running a knife along the inside of the pan before expanding the sides did the trick for easy release. Cool the chocolate before adding it to the cake. Once the chocolate mixture is completely blended, it needs to cool off a bit before spreading on the cake. You can drip some of the chocolate down the sides if you wish, but I chose to keep it all on the top. Store in the refrigerator or freezer. It should keep for up to 2 weeks in the refrigerator or  up to 6 months when frozen.