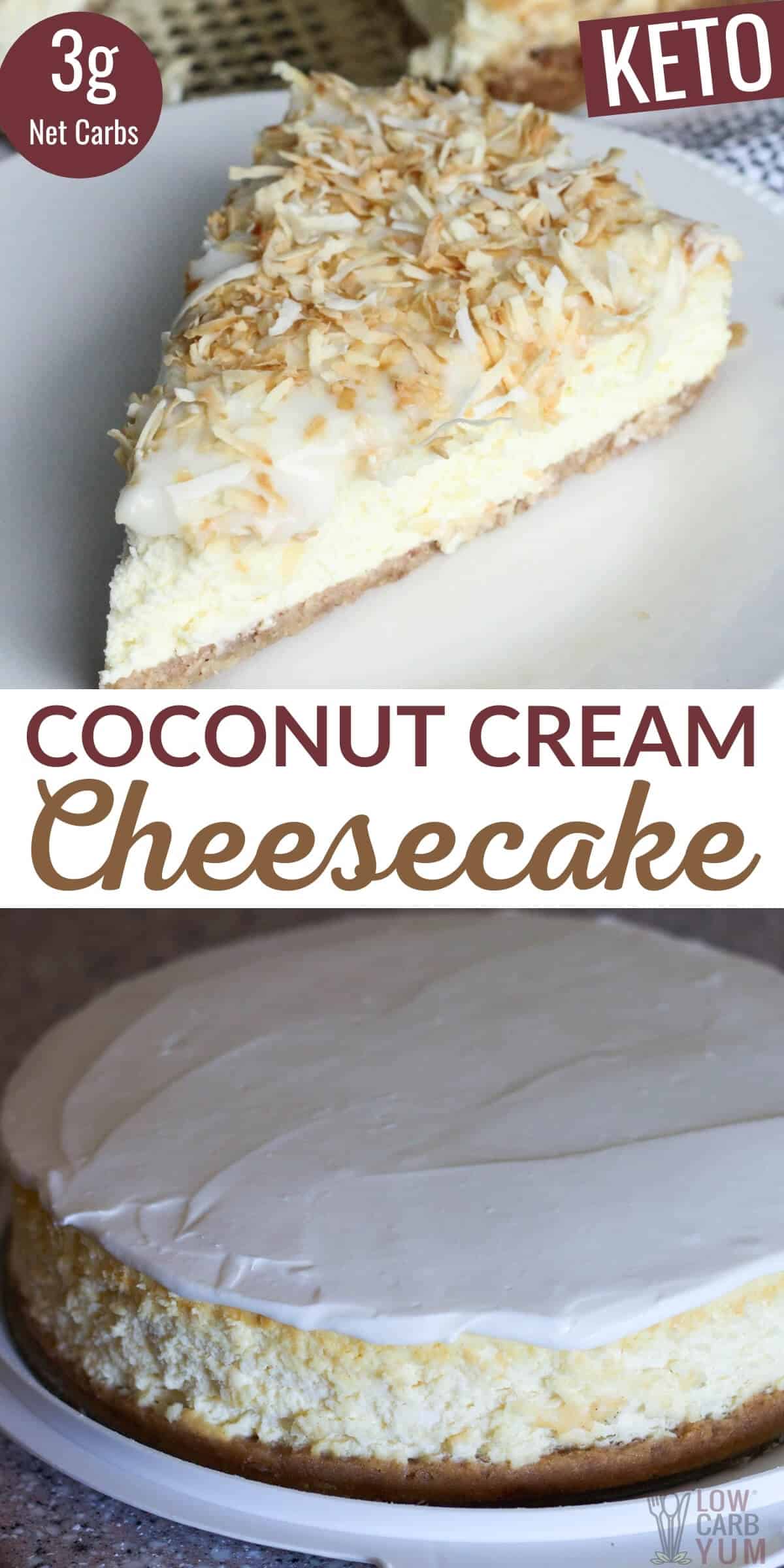 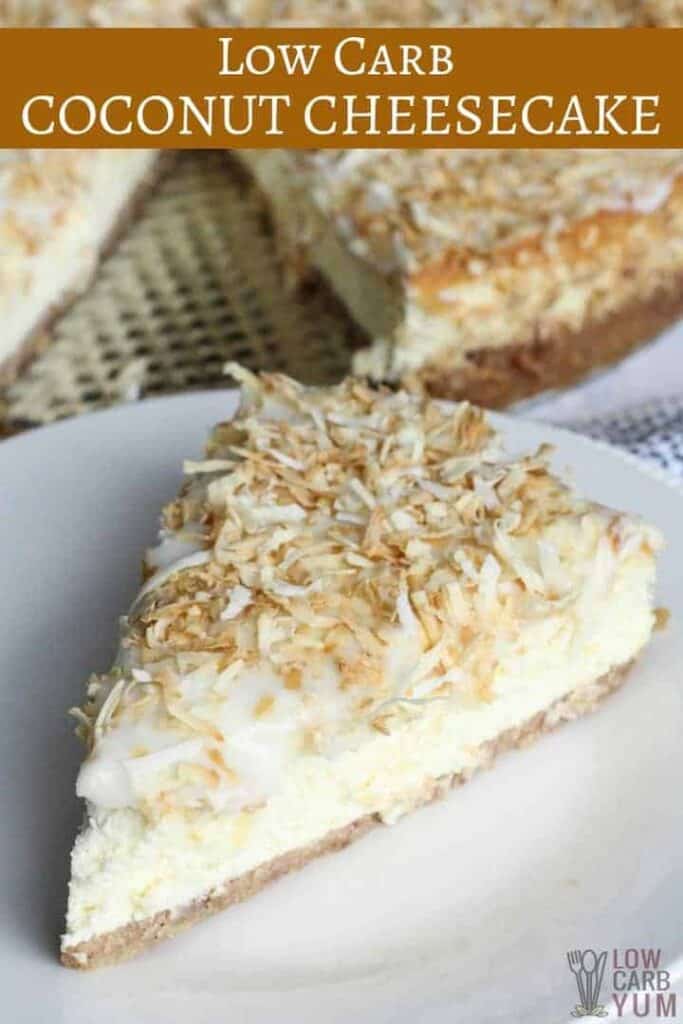 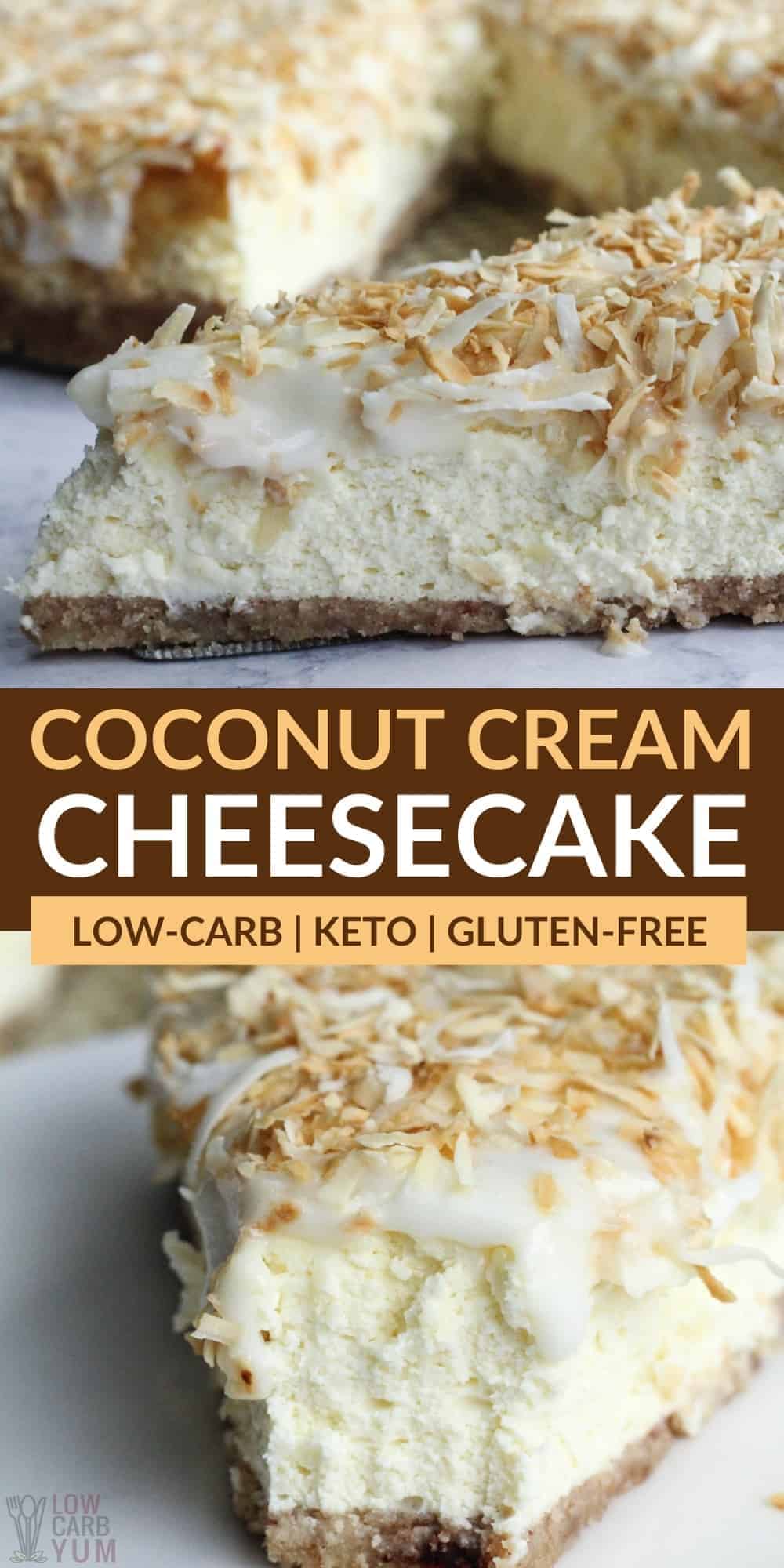 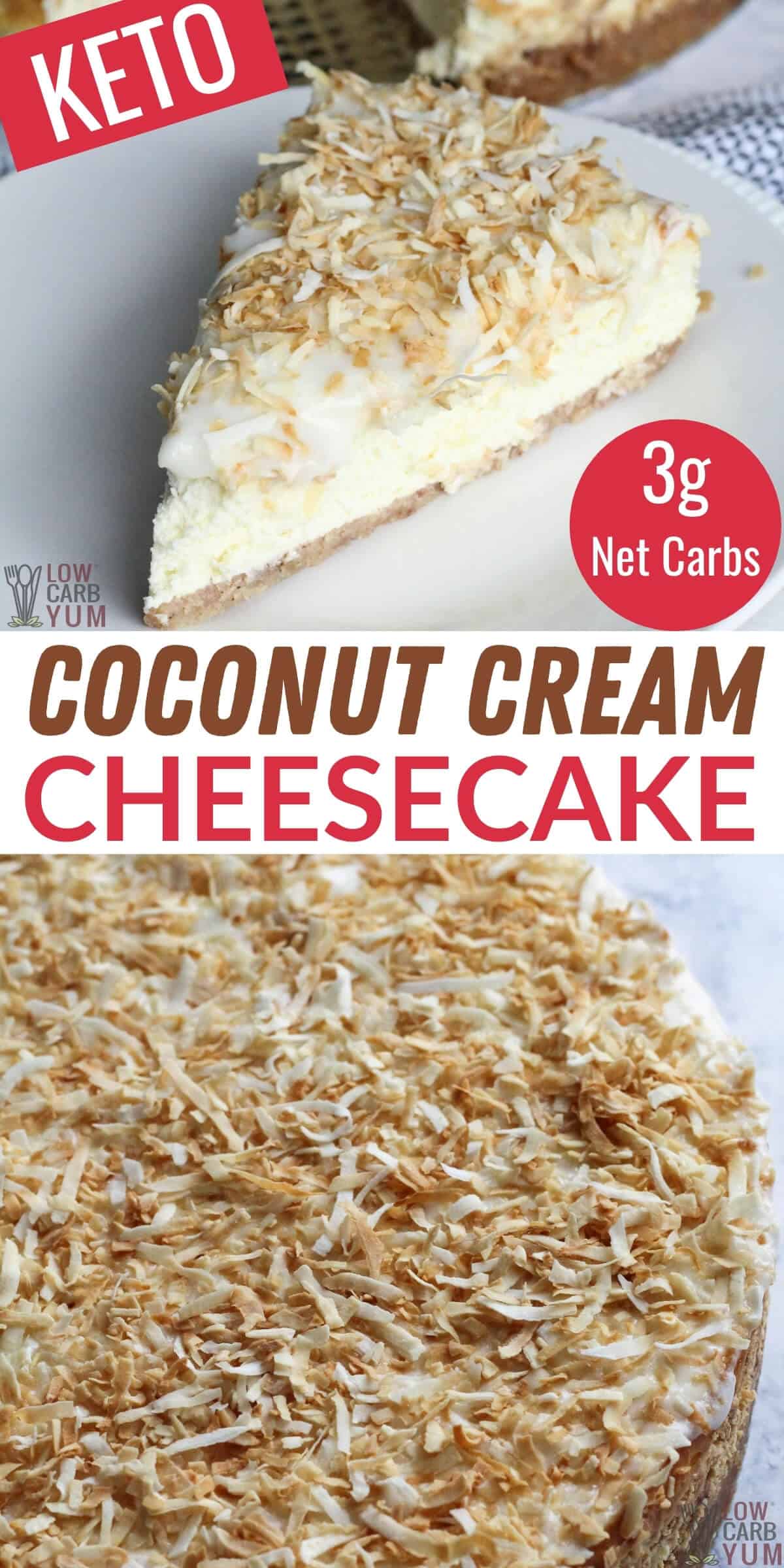 If you’re like most low carb dieters, you enjoy indulging in high-fat, low carb cheesecake recipes. I certainly do and it’s been a staple dessert for many years!

Cream cheese is by far one of my favorite low carb ingredients. It goes well in both sweet and savory recipes. And, it’s the key to making a quick and easy sugar-free cheesecake mousse treat.

Another key ingredient for this cheesecake recipe is coconut cream. But, don’t confuse it with cream of coconut which is typically sweetened with sugar.

I’ve tried finding canned coconut cream in the local stores, but none of them seem to carry it. I believe you can buy it at Trader Joe’s and Whole Foods Market, but those stores are a bit far from me.

I’ve been buying mine online at LC Foods which is an online market for low carb foods. However, I recently became a member of Thrive Market and found they have the cheapest price of all on canned coconut cream.

You can also get coconut cream from a can of regular high fat coconut milk. Just put the can in the refrigerator overnight and the solid part that ends up on top is coconut cream.

How To Make Low-Carb Coconut Crust

I simply mix all the ingredients together and then press the mixture into the bottom of a springform pan. It’s a great alternative to crusts made with high carb graham cracker crumbs.

While preparing the cheesecake filling, I like to put the pan with the prepared crust into the refrigerator to chill. This hardens up the butter to form a better crust layer before adding the filling.

How To Make Coconut Cream Cheesecake

There are just a few steps to making this low-carb cheesecake.

Once the crust has been prepared, it’s time to make the low carb coconut cream cheesecake filling. My recipe uses the following keto-friendly ingredients:

For a stronger flavor, coconut extract can be added as well or in place of the vanilla extract.

It does help to beat the cream cheese first if it’s still a little cold from the refrigerator. But it’s good to plan things out ahead and let the cream cheese sit at room temperature before making the filling. That way the mixture will be smooth without any cheese lumps in it.

When all the ingredients for the filling have been blended together, the mixture is poured over the prepared crust in the springform pan.

If using a water bath, the pan should be wrapped in aluminum foil and place in a roasting pan with an inch or two of water in it. Although not required, the steaming water provides a humid environment in the oven which can help prevent the cheesecake from cracking.

The cheesecake is now ready to be baked. I start out at 350°F for the first 15 minutes and then I reduce the oven temperature to 250°F and bake for another 75-90 minutes.

A lower temperature fully cooks the cheesecake without causing it to brown up on the outside before the inside is fully cooked. If you don’t mind the extra time, you can even try lowering the temperature more.

Remove the cheesecake from the oven when the center is still a little jiggly but the majority of the cake has set. This will ensure that you don’t overbake it.

Although the coconut cheesecake is pretty good plain, adding a coconut cream frosting sprinkled with toasted coconut takes it to a whole new level. It adds a more appealing look to the keto dessert giving it a look similar to my popular keto coconut cream pie.

The frosting is just a blend of coconut cream, powdered low carb sweetener, and a little cream cheese.

I discovered that adding a touch of cream cheese can mask the cooling taste of erythritol which is the bulking agent used in many granular low carb sweeteners. That’s why I added couple of ounces to the coconut cream frosting that tops the cheesecake.

A sprinkling of toasted coconut over the frosting adds color and dimension.

To toast the coconut, simply spread unsweetened dried coconut shreds on a baking sheet and bake for 3 to 5 minutes at 375°F. Shredded coconut toasts quickly so you’ll need to keep an eye on it while it’s baking.

The entire recipe is at the bottom of this post. First, here are some answers to some frequently asked questions.

How big should I make the servings?

This low carb coconut cream cheesecake is very filling so you’ll want to keep the servings fairly small. I had a slice for an early afternoon snack and wasn’t hungry until dinnertime.

How do I prevent the outside of the cheesecake from overbaking?

Cooking at a low temperature makes cheesecake much creamier and doesn’t overbake the outside. I didn’t use a water bath and the top of the cheesecake didn’t crack.

How do you make this recipe dairy-free?

The cheesecake could be made without dairy by using dairy-free cream cheese-like Kite’s Hill which is made from almond milk. Butter flavored coconut oil could be used in the crust.

The frosting is a nice addition to the cheesecake and allows the rest of the coconut cream in the can to be used. I was amazed at how great it tasted!

I’ll always add a bit of cream cheese to my low carb frosting from now on to get rid of the cooling effect of the erythritol.

What is another topping for this cheesecake?

You could use a chocolate ganache as an alternative topping. It would be similar to my popular Boston Cream Cheesecake recipe.

Although there’s a nice taste of coconut in this dessert, I’m thinking there’s always room to take it up a notch. Next time, I may add some unsweetened coconut to the filling!

Other Recipes To Love

Want to try a few more easy low-carb keto pie recipes? Here are some of my favorites:

And, if you like coconut, try an easy coconut jelly recipe. It’s dairy-free and is even suitable for the very strict autoimmune protocol (AIP) diet. 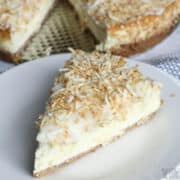 For added color and coconut flavor, sprinkle some toasted coconut on top of the cheesecake.