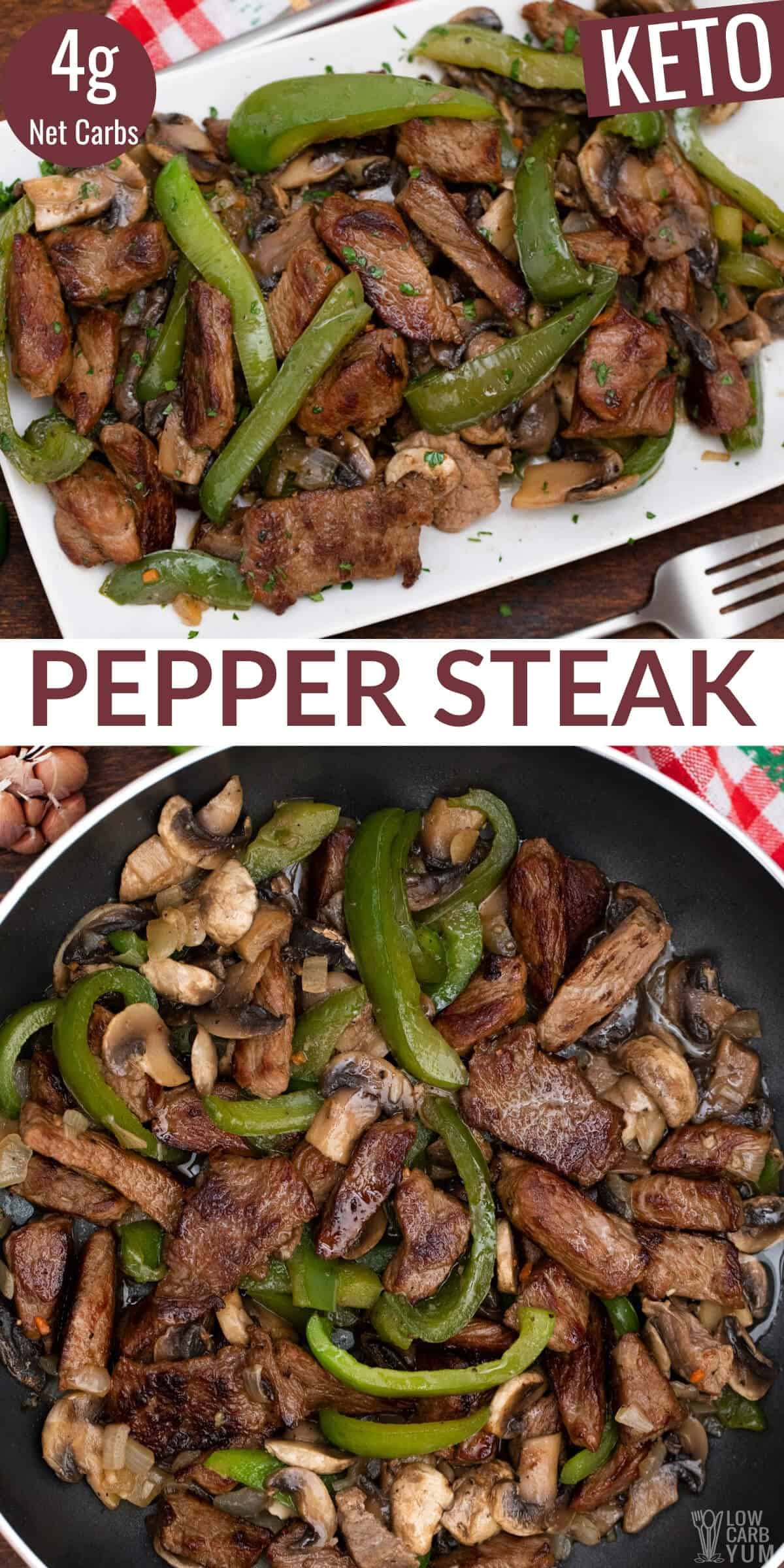 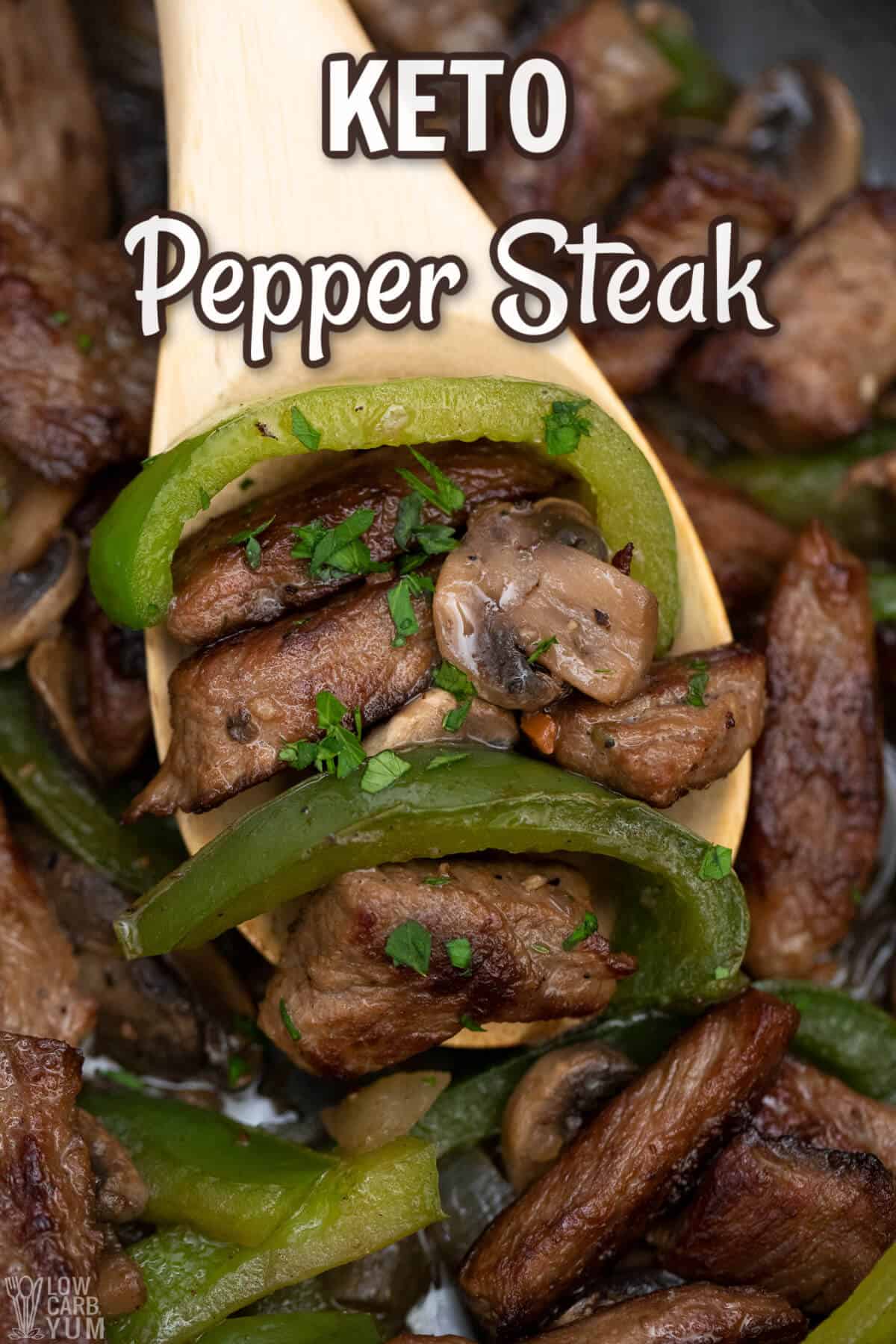 A quick and easy keto pepper steak low-carb beef stir fry is perfect for weeknight dinners. It's a simple dish that can be made in less than 30 minutes.

When it comes to low-carb dinners, nothing beats a quick and easy meat and vegetable dish. That's why pepper steak has been one of my long time favorites.

It's perfect for weeknight family dinners because it cooks up in less than 30 minutes. It comes together even faster if all the ingredients have already been prepped and sliced.

That's why I know you're going to love this low-carb keto beef stir fry. It's so simple you really don't even need a recipe!

I usually make the dish with just sliced green pepper and onion stir fried with some soy sauce, broth, and seasoning. Mushrooms are completely optional.

Sometimes I'll add in another keto friendly vegetable like broccoli or baby corn. A whole 15 ounce can of baby corn has just 10 grams of carbs, 6 of which are fiber. That's just 4g net carbs for added to the 4 serving dish!

I've even made low-carb corn bread with baby corn. It's much cheaper than having to buy the overpriced corn extract!

It only takes a few steps to make a keto stir fry with beef:

That's all there is to it!

This recipe was originally published in 2010. Since that time, I've had a few questions so let me answer some of those here.

Are there carbs in steak?

Red meat is a popular food on keto because it contains zero carbs. But some cooks use seasoning and rubs that aren't carb free so you may need to look out for that.

What kind of steak is best for beef stir fry?

Although I used sirloin in the recipe, flank steak is generally used for stir frying. That's because it tends to have more flavor and does well when cut thin.

How can I thicken the sauce?

Most of the liquid should evaporate off when cooking the vegetables. But you can sprinkle in about ¼ teaspoon of xanthan gum to the broth mixture. Or, a tablespoon or so of coconut or almond flour can be mixed into the soy sauce before adding.

Are there carbs in peppers and onions?

One medium green bell pepper has about 6g carbs and ¼ cup onion adds roughly 4g carbs. So the peppers and onions in the recipe contain about 10g total carbs which is just over 2g per serving.

Although not needed, I like to add a bit of cauliflower rice as a side to this low-carb beef stir fry recipe. I whip it up quickly in the microwave which takes only 5 minutes.

You can also pre-shred the cauliflower and store it in single servings in the freezer. Then, when you want a serving, just pop it in the microwave or steam it up!

Adding in cauliflower rice really does complete this keto pepper steak dish. And, it reminds me of the dishes my father used to serve when I was growing up.

Other Easy Ways To Cook Beef

I hope you enjoy this Asian inspired low-carb dish. Other keto beef recipes you might enjoy are:

Want to try a chicken dish instead? My chicken bok choy stir fry is always a winner. 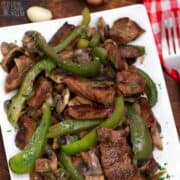 Baby corn will add another 1-2 grams net carbs per serving. Other keto friendly vegetables like broccoli can be added or used in place of the peppers and or mushrooms. For a thick sauce, sprinkle in about ¼ to ½ teaspoon xanthan gum. Adding in about a 1 to 3 teaspoons of coconut flour or almond flour to the soy sauce before adding may also work. Flank steak is a popular cut to use in beef stir fry so it can be used instead of the sirloin.