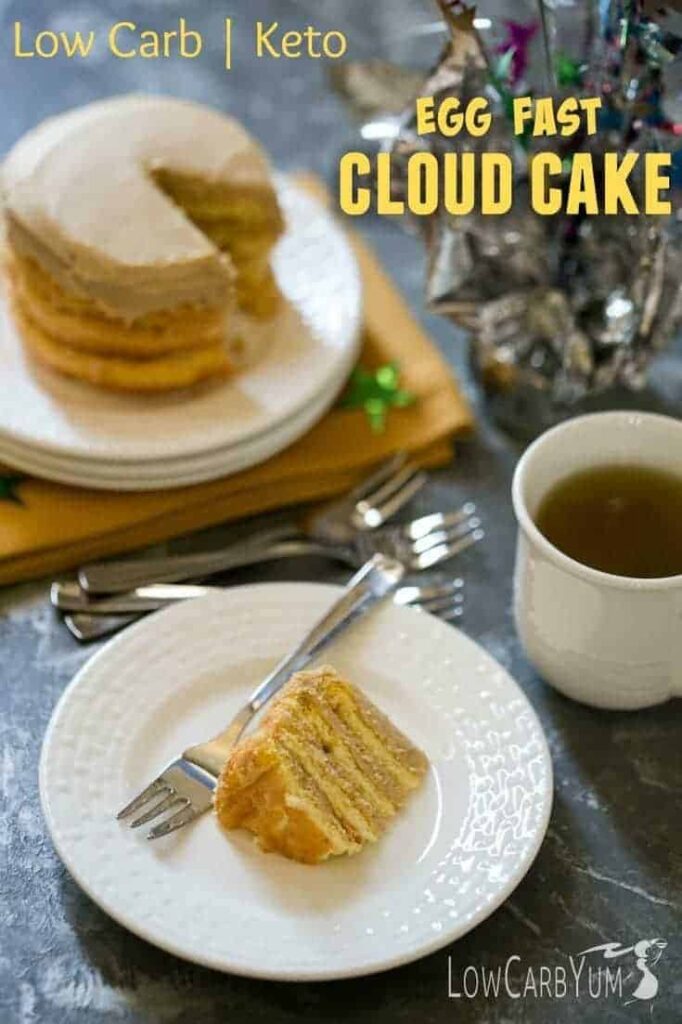 Sticking to a very low carb egg fast diet plan doesn’t have to eliminate sweets. You can enjoy this egg fast cloud cake during your fast.

Today’s my birthday! Since I’ve been egg fasting, I’m celebrating with an egg fast cloud cake. My weight has really come down over the last two weeks so I made a super low carb cake to keep me in ketosis.

As a food blogger, I get my hands in lots of yummy dishes every week. I typically experiment with recipes every weekend as I work as an engineer full-time.

The good thing is that I usually make enough food over the weekend to get me through the work week. Unfortunately, I tend to overeat, particularly when it comes to the sweet recipes.

Over the last year, I’ve come to realize that the low carb sweets have caused me to gain weight. I think the sweet taste triggers my hunger so I eat more than I should.

This year, I have been cutting back on sweets. And, guess what? Sweets are starting to look really disgusting to me.

My love for sweet food is not like it used to be. I’ve been gradually cutting back on the sweetener I use. As a result, I find I’m less hungry during the day.

Even though low carb sweeteners like erythritol don’t spike insulin, I think there must be something else affected. It could be leptin or ghrelin which are other hormones shown to affect weight in humans.

Leptin and ghrelin are known as the hunger hormones. Leptin decreases appetite while ghrelin increases it.

It’s been shown that many severely overweight people have grown leptin resistant causing them to overeat. Leptin appears to be the major hunger hormone and some think it may actually regulate ghrelin.

Based on my own experience and the information I’ve read online, I’m convinced the two hunger hormones are affected by eating sweet foods.

When I eat low carb sweets, I am hungrier and overeat. This has caused my weight to slowly increase even on a low carb diet.

When I go on an egg fast, I typically stay away from sugar alcohols. However, I ended up using a little Sukrin Melis in the frosting for this egg fast cloud cake.

I had three failed attempts at using stevia and monk fruit extracts to sweeten the frosting. So, I decided to break the sugar alcohol rule for my birthday since it only comes around once a year.

I’ll continue working on a frosting recipe that doesn’t contain any sugar alcohols or fiber sweetener. Overusing both of those types of sweeteners appears to make me gain weight due to overeating.

I also added in a bit of cream cheese to the frosting even though it ups the cheese ratio which is against the egg fast rules. The cream cheese offsets the cooling taste of the erythritol. But, an extra ounce of cheese spread between four servings isn’t going to hurt!

Buttercream frosting is my favorite so that’s what I wanted to use on this egg fast cloud cake. I also flavored the icing with a little instant espresso powder to give it a coffee flavor.

This yummy low carb egg fast cloud cake with coffee buttercream frosting really hit the spot during my second week of egg fasting. I did notice that my hunger was slightly increased from the erythritol.

The erythritol amount in the cake is only about 10 grams per serving. And, I was eating half portion servings so I was only getting 5 grams a slice.

I think the key for using erythritol blend sweeteners like Swerve and Sukrin is to use as little as possible. Many low carb dessert recipes are adding too much erythritol because it doesn’t impact insulin.

However, you also need to consider the role that erythritol and other low carb sweeteners have on leptin and ghrelin. Keeping these hunger hormones balanced will help you keep weight off. 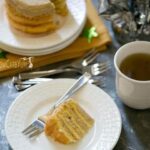