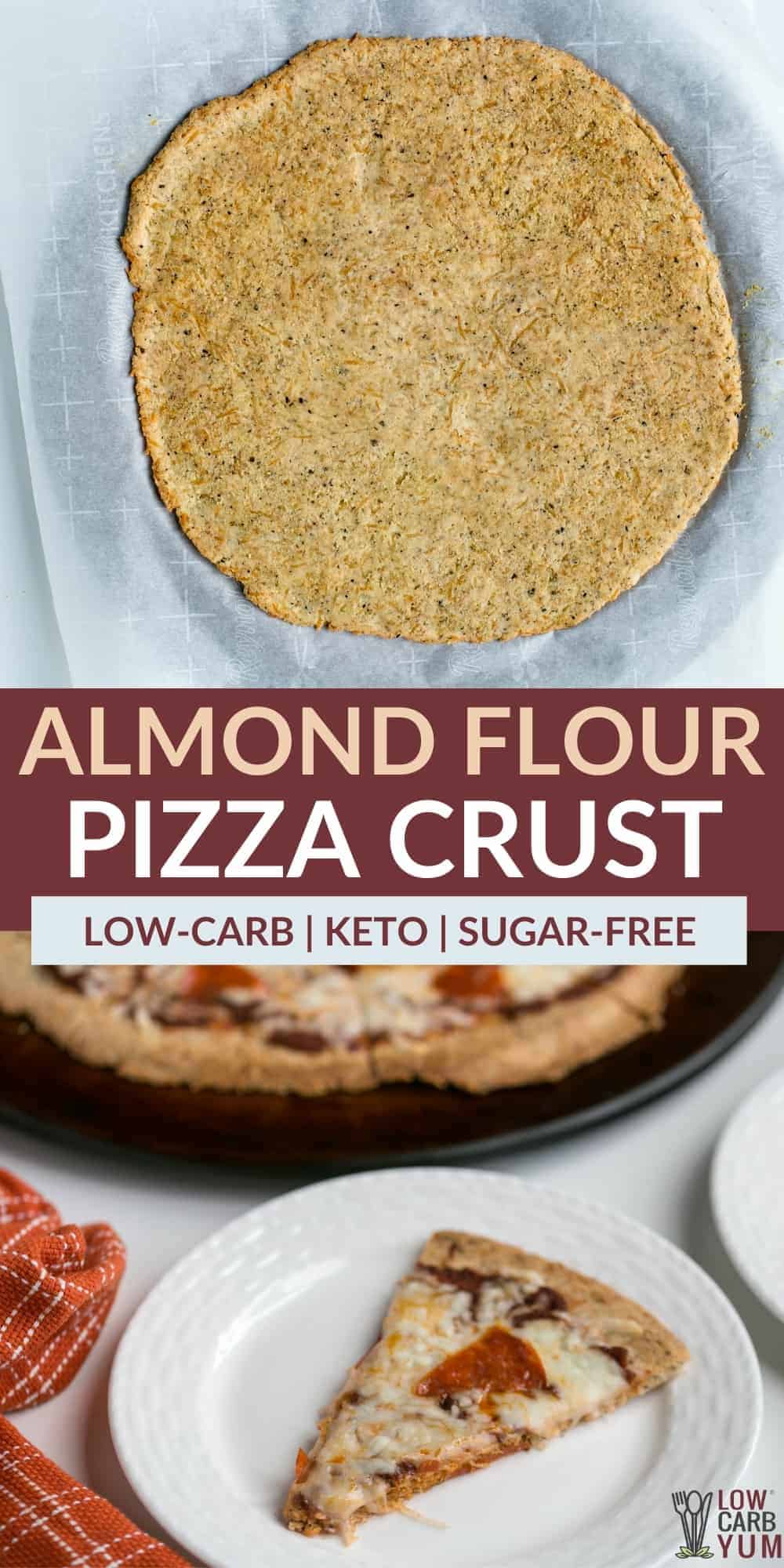 Craving pizza but without all the carbs? With this easy almond flour pizza crust, you can enjoy fresh homemade pizza that’s low carb and keto friendly.

You can make low carb pizza and bread sticks with coconut flour pizza dough. Or make the popular cauliflower crust (so easy with Trader Joe’s selling it now). But some folks prefer keto pizza crust made with only almond flour.

Why the need for almond flour? Well, if you’re like most people and love regular crust with wheat flour, you can probably eat two or three slices, no problem. With this pizza, you can do the same.

However, after you eat wheat flour, it can trigger several undesirable symptoms such as bloating, congestion, foggy brain, constipation, sluggishness, and other inflammatory symptoms.

And you don’t have to have Celiac Disease to experience the ill effects of wheat. Many people are sensitive to wheat without knowing it.

But if you ever experience any of the above symptoms after eating regular pizza or anything else with wheat flour, you’re likely at least wheat- or gluten-sensitive.

There’s nothing wrong with wheat in and of itself. Wheat allowed humanity to settle down in communities after millennia of nomadic hunting. The problem with wheat appears to be the modern processing of it.

Wheat isn’t the same food it was a couple generations ago. And it certainly was far more nutritious 10,000 years ago than today.

Ever since modern agricultural methods were devised, allowing manufacturers to produce way more wheat than before, wheat has become far less nutritious.

In comparison, ancient wheat contains the bran and the germ. The former serves as the outer layer of the grain. It’s rich in fiber, antioxidants, B vitamins and minerals.

The germ is the inner layer of wheat. It contains healthy fats, B vitamins, beneficial plant compounds and vitamin E.

But when you go out to eat pizza at a restaurant, chances are slim that the crust will be an ancient grain variety. The crust will most likely be made from refined grains, stripped of the bran and germ.

Modern wheat take’s the lion’s share of the blame for the ever-increasing rates of obesity and diabetes. Refined wheat as Healthline says, is unhealthy because it’s not soaked, sprouted or fermented. Nor is it baked using slow rise yeast.

Consequently, the wheat in your pizza parlor pie is woefully deficient in amino acids. And, one reason why it causes negative symptoms is that it contains anti-nutrients.

Phytic acid and lectins are anti-nutrients which help protect the plant against insects. But when you don’t soak grains, you’re consuming these compounds which hinder your body’s ability to absorb nutrients.

Consequently, your body starts attacking itself. This is indicative of an auto-immune response or more seriously, an autoimmune disease.

I don’t want my family eating refined wheat and experiencing the health problems I had. That’s why I make alternatives to wheat. Now let’s get baking with almond flour pizza crust….

Now when’s the last time you’ve had pizza made with psyillium husk and eggs? The reason for the psyillium husk is it provides bulk to the crust. Without it, it would be rather flimsy.

Moreover, psyillium in many baking recipes provides a bready texture. It’s way healthier than modern wheat, and there’s a good reason why many people use the powder as laxative as it’s very high in fiber.

As for the eggs, they also serve as a bonding agent for the dough. However, if you’re looking for an almond flour pizza crust without eggs, you should try my egg-free Fat Head pizza dough.

Ready to make the crust for a keto pizza? Let’s get to it….

Next, in a small bowl, combine the eggs and olive oil. (photos 6-8)

The third step is pouring the egg mix into the dry ingredients. Stir until the dough is formed. (photos 9 & 10)

After that, form the dough into a ball and roll out between two sheets of parchment paper. (photos 11 & 12)

Then, transfer to a pizza pan and remove the top paper. (photo 13)

But at this point, you’re not quite ready to enjoy the delicious almond flour pizza crust. You’ll first need to flip the crust on the pizza pan and remove the parchment paper. (photo 15)

Add the sauce and toppings now. (photos 16 & 17) I can’t stand to wait any longer to eat, so I just have the broiler ready to go and I throw the pizza in the broiler until it’s cooked to my well-done preference. (photo 18)

Or, if you have more patience then I have, you can just leave it in the oven, crank it up to 425 and cook an additional 5-10 minutes.

Enjoy this simple keto pizza recipe. And if you give the recipe a try, let us know what you think in the comment section below. 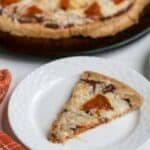 Nutritional information is approximate and provided for each slice. The data does not include the optional toppings.