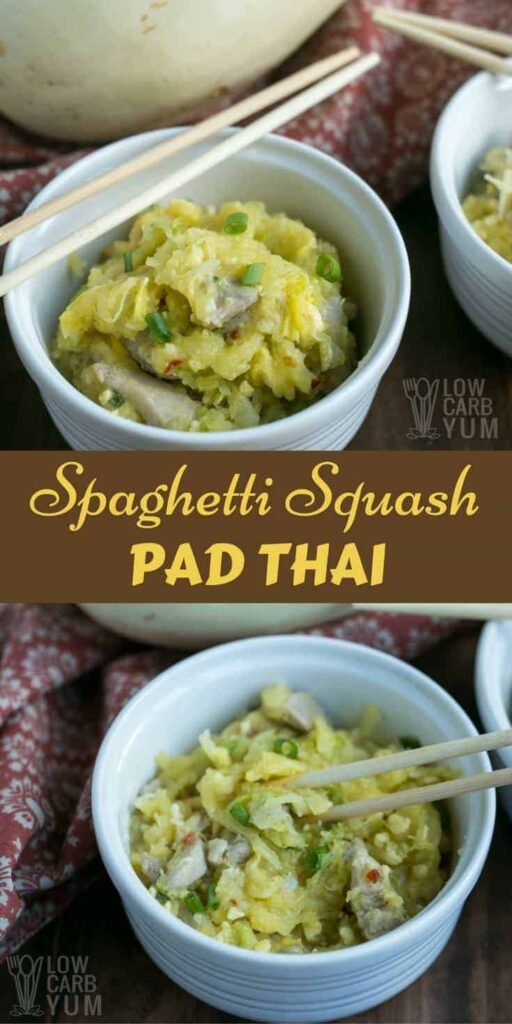 I was in the mood for a lo mein style Asian dish so I picked up a couple spaghetti squash to use for the noodles. Although I thought about making my favorite Filipino pancit version, I decided to try something different.

Thai food is really popular so went looking for a Thailand based dish made with noodles. The first thing that came up was Pad thai so I thought I’d give it a try.

The traditional dish uses dried shrimp, but I opted to use chicken in my low carb spaghetti squash Pad thai. I thought about replacing the fish sauce as well. However, I chose to use it.

My father used to always have a bottle of patis in his kitchen. It’s the Filipino version of fish sauce. I always thought it was a disgusting condiment to use when I was a kid.

Now that I’m older and my tastebuds are more refined, I’m open to using the salty fish sauce. It must be pretty popular because it wasn’t hard to find in the grocery store.

I’ll admit that I made this spaghetti squash Pad thai to suit my own tastes. I loosely based the recipe on one I found at thaitable.com.

Although I’ve seen tamarind sold in my regular store, they didn’t have it when I was shopping for ingredients. So, I used some lemon to provide a sour taste.

Being a legume, tamarind probably isn’t the best ingredient for a low carb keto diet anyway. Peanuts aren’t either so I left those out as well. I could have used cashews, but they add some carbs.

The flavor of the fish sauce was certainly noticeable. However, I liked the taste it gave to the dish. I’m definitely glad I left it in.

Sugar is usually added to the sauce to enhance the flavor. I added in some SweetLeaf stevia drops instead. Feel free to change that with your preferred sweetener or just leave it out.

The red pepper flakes added a nice amount of spice to the spaghetti squash Pad thai. You definitely don’t want to leave that out!

The taste of this dish reminded me a little of the Korean beef that I’ve made. It had a similar salty sweet and sour flavor.

Since I’m sensitive to egg whites, I probably should have left the scrambled eggs out. I suppose I could have just used the yolks mixed with some aquafaba.

Because of my sensitivity, I really need to work on more egg-free recipes. But, I love them so much it’s tough to move away from them.

Others seem to be having good results when moving to a dairy-free diet as well. I just don’t know if I can give up cheese. 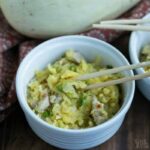