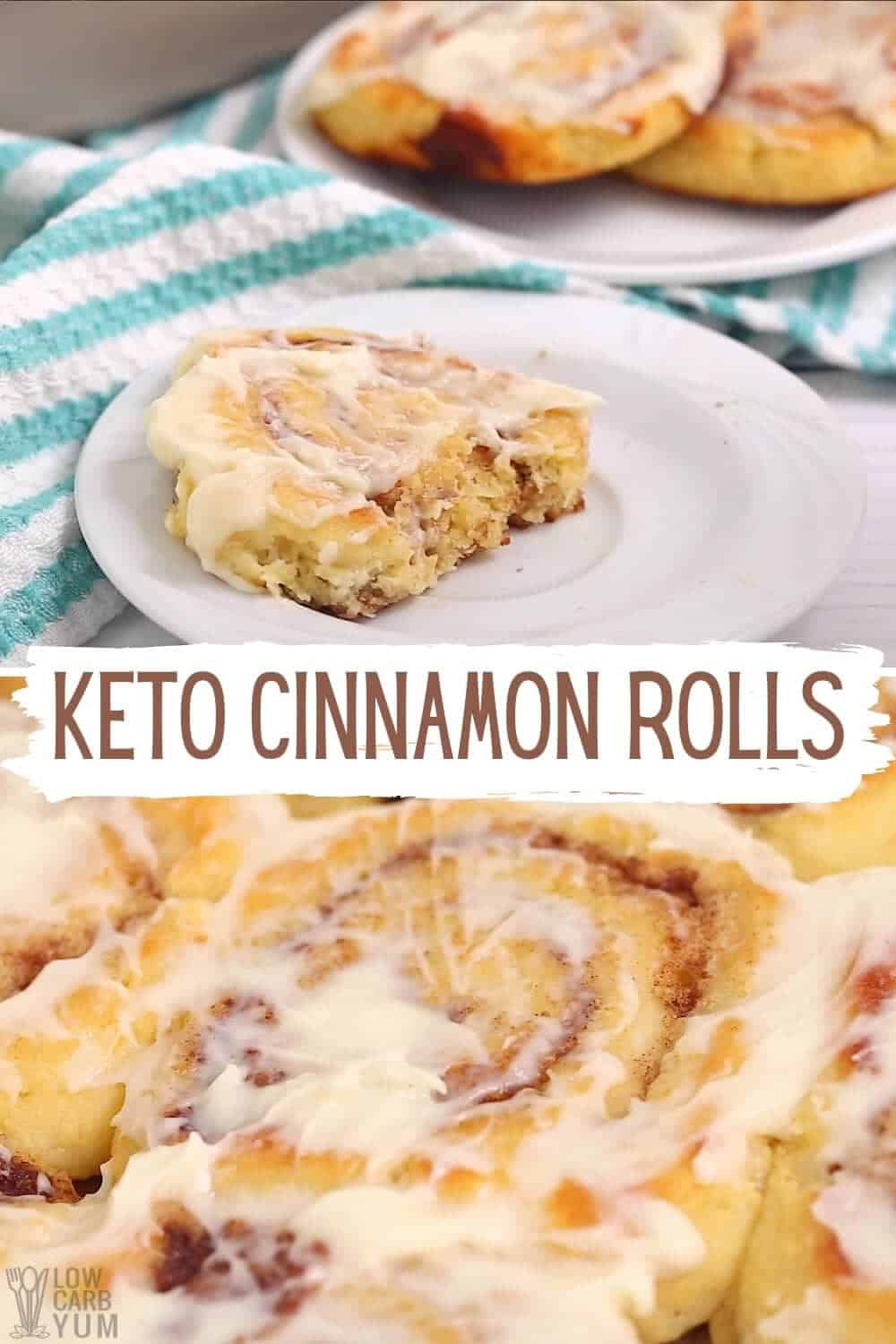 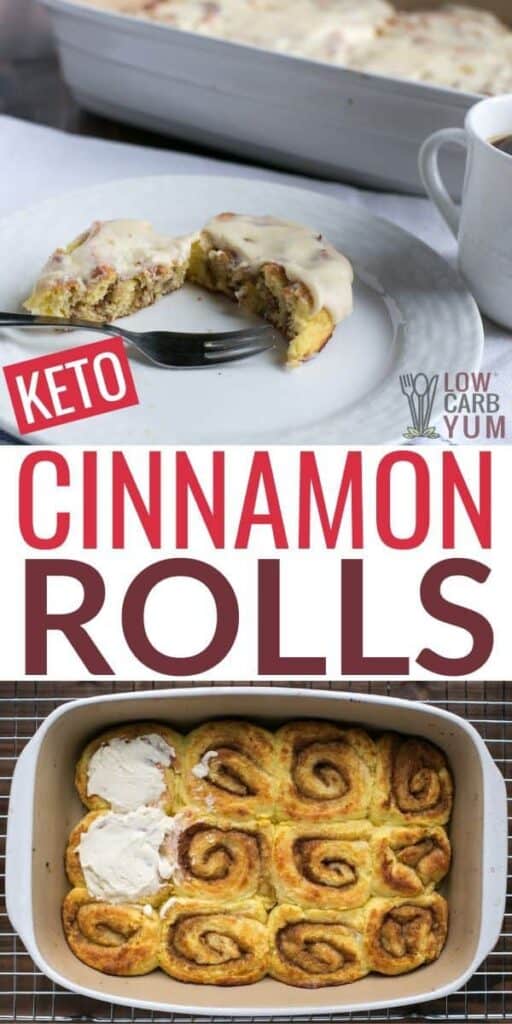 Coconut flour cinnamon rolls make for a delicious grab-and-go breakfast, or the perfect treat to savor alongside your morning coffee. It’s one of my favorites!

The first time I made low-carb cinnamon rolls, I never shared them on my blog because I didn’t love the texture. Cinnamon rolls need to be soft and chewy, otherwise, they just aren’t right.

But, a few years later, I had the idea to try and make a new version of my cinnamon rolls recipe using the fathead dough from my low-carb bagels. That dough uses coconut flour, which I prefer to almond flour.

Sure enough, coconut flour was the answer!

I was so impressed with how these keto cinnamon rolls turned out the second time. The dough is light and fluffy like a traditional pastry, with just the right amount of sweetness.

These remind me so much of Cinnabon rolls, especially when served warm! They are amazing fresh out of the oven.

Tip: If eating them later, I recommend reheating them in the microwave for about 40 seconds.

The main ingredient in this keto cinnamon roll recipe is fathead dough. That means it uses mozzarella cheese to thicken it. It also means you don’t have to wait for the dough to rise, so it’s a quicker recipe than traditional cinnamon rolls.

There are three parts to these cinnamon rolls – the dough, the filling, and the icing.

I used a combination of cheese (cream cheese and mozzarella cheese) with coconut flour. To make the dough rise really well, use baking powder.

For the butter, don’t use margarine! Make sure you are using real unsalted butter. It has a better taste and the healthy fats you need.

Just like with traditional cinnamon rolls, I used softened butter and ground cinnamon with some brown sugar substitute.

I made a cream cheese frosting to go on top of the cinnamon rolls!

Keep this recipe safe because you’ll use this icing on other things too – like these keto zucchini cupcakes.

For the icing, you just need some cream cheese, butter, powdered sweetener, and vanilla extract.

If your icing ends up being too thick, you can thin it down with some almond or coconut milk.

All of the steps and details for these low carb cinnamon rolls are in the printable recipe card at the bottom of this post. First, here are some helpful tips and step-by-step pictures- This is a super-easy recipe.

Note: Keep reading to see the detailed instructions for each step. The amount used for each ingredient is listed in the printable recipe card at the bottom of this post.

The very first step is to prepare the coconut flour fat head dough. To do this, you mix the dry ingredients together in a large bowl first and set them aside.

Then, melt the two types of cheese in a bowl. You want them to be completely melted and gooey.

After the cheese is melted, stir in the dry ingredient mixture as well as the beaten eggs, melted butter, and vanilla. Mix together until a dough is formed.

Roll the dough out into a large rectangle with a rolling pin on a piece of parchment paper. It should be about the same size as the baking pan. If the dough is too sticky, you can place it between two pieces of parchment paper to make it easier to roll out.

After the dough is rolled out, you are ready for the filling. This is a really easy step!

Just mix the brown low-carb sweetener with the cinnamon. Set this aside.

Starting at one of the shorter ends of the dough, roll it into a log.

Once fully rolled, slice the dough with a sharp knife into 12 rounds, each about 1-inch thick.

Place the rounds into the prepared baking pan. Try to leave some room between each roll so they have space to expand as they bake.

Remove from the oven and allow to cool slightly in the baking pan on a wire rack.

While the cinnamon rolls are baking, make your cream cheese icing!

To do this, I like to use an electric mixer. I’m sure you can do it by hand, but it takes so much longer.

If the icing seems too thick, add in a little low-carb milk (coconut or almond work well) to reach the desired consistency.

Once the rolls have cooled slightly (they can still be warm), spread the icing onto the rolls while they are still in the baking dish.

The entire recipe is just a little bit further below. First, here are a few of the most frequent questions about keto cinnamon rolls.

How do you store the cinnamon rolls?

You can store these low-carb fathead cinnamon rolls in the fridge for up to a week to indulge any time. If you’d like to store your cinnamon rolls for longer, you do have the option to freeze them.

What's the best way to freeze them?

When I freeze my fathead dough cinnamon rolls, I bake them first, then freeze them. Once I’m ready to eat one, I place it in the oven at 350°F for about 5 minutes. They turn out just as delicious; maybe even better!

Can the dough be frozen unbaked?

How many carbs are in keto cinnamon rolls?

Each roll has just 3g net carbs after subtracting 1g of fiber. There are also 209 calories and 1 gram of sugar per cinnamon roll. Compare that to one Cinnabon Classic Roll, which has 880 calories, 125 grams of net carbs, and 58 grams of sugar!

There are a few ways you can play around with this recipe to create the perfect low-carb cinnamon rolls.

There are so many ways to enjoy fathead cinnamon rolls! But, if you need to watch portions, try mini cinnamon roll waffles made with a mini waffle maker.

Looking for a few other grab-and-go keto breakfast recipes? Check out a few of these favorites: 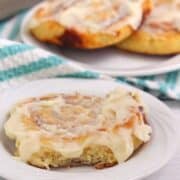 For extra sweet rolls, you may want to increase the amount of sweetener. I would play around with liquid sweetener until you reach your desired taste. If you want something gooey, add in some sugar free maple syrup or a fiber syrup to the butter layer. This will make the rolls extra gooey and increase the sweetness as well. Nuts are a great addition. Simply add your favorite chopped nuts to the cinnamon mixture sprinkled on before you roll up the dough log. Pecans add a lovely taste! You can store these low-carb fathead cinnamon rolls in the fridge for up to a week to indulge any time. If you’d like to store your cinnamon rolls for longer, you do have the option to freeze them.  When I freeze my fathead dough cinnamon rolls, I bake them first, then freeze them. Once I’m ready to eat one, I place it in the oven at 350°F for about 5 minutes. They turn out just as delicious; maybe even better!