This spicy crockpot chicken chili pepper stew can be prepared the night before and slow cooked in the crock pot the next day. A super quick and easy meal to make ahead.

I have been spending some time exploring other cuisines to see what unique low carb dishes I could find. I stumbled upon a Spicy Chilli Chicken recipe by fellow blogger Blessing at Global Food Book.

The Global Food Book site has recipes from many different cuisines such as African, American, Asian, Australian, and European. And, I was intrigued by the Spicy Chilli Chicken recipe posted on the site.

The recipe calls for an ingredient that I would not have expected or thought to use in such a recipe. That special ingredient is peanut butter which is hard to detect in the final product.

I chose to modify the original recipe by cooking the dish in a crock pot rather than the oven. I also used cut up skinless chicken breasts instead of cutting up whole chickens into pieces to make a spicy crockpot chicken chili stew.

Because I was cooking the dish in a crock pot, I decided to make it more of a stew. So, I used chicken broth in place of the Knorr cubes which gave me a better stew base.

If you’d like more of a baked marinated chili pepper chicken using cut whole chicken, I would recommend baking according to the original recipe after marinating. However, I preferred the simpler one pot cooking method.

This spicy crockpot chicken chili stew is so simple to throw together. In fact, my chicken breasts were still frozen when I cut it into large chunks.

I threw the frozen chicken pieces into the crock along with the chopped peppers, onions, garlic, and other seasonings. The crock was then put in the refrigerator overnight.

In the morning, I just took the crock out of the refrigerator and put in on the heated stand. About six hours later, lunch was done. It couldn’t get much easier!

Looking back, I probably should have cut the chicken up into smaller pieces. I ended up chopping them up with a spoon into bite size pieces as I ate it.

Now I am a fan of hot food, but this dish put my mouth on fire. To put the fire out, I found it best to serve with full fat sour cream. So, you may want to cut back on the chili peppers to tone things down.

Two jalapeños were added to the dish with one seeded and the other unseeded. I may seed the second jalapeño pepper next time or only put in one to reduce the heat.

I really enjoyed this spicy crockpot chicken chili stew even though it was a lot hotter than expected. The thing I really like about this dish is how little time it requires for preparation and the fact that it can be easily put together the night before. 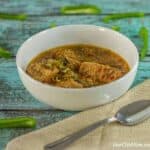 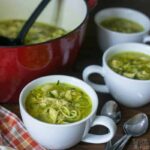 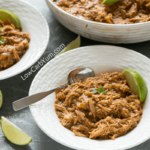 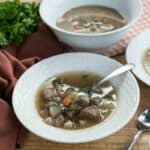