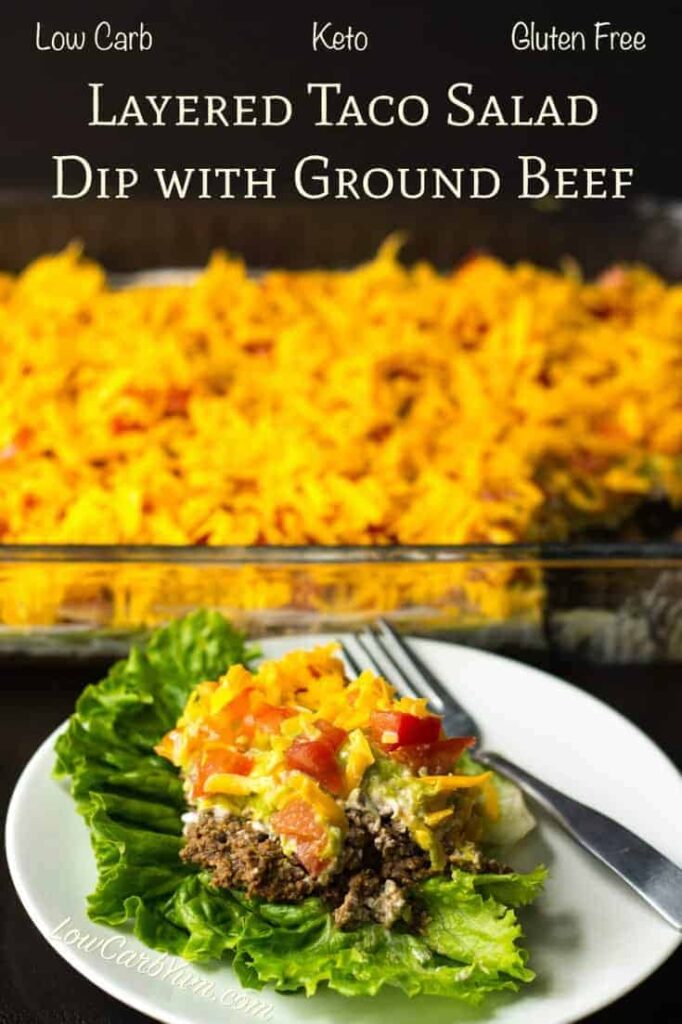 Taco dip with meat is perfect served as a salad topping or for dipping keto tortilla chips. It can be made with all ground beef or with a layer of low carb black soy beans.

I’ve had some unusual cravings for a taco salad lately. The cafeteria at work used to sell the ones that come in the tortilla bowls. But these days, I’d just add some low carb tortilla chips and skip the bowl.

I think my whole taco craving started after seeing a 7-layer taco dip with meat and refried beans at my sister’s house during a birthday party for her son. Although the dip looked very tempting, I knew I better stay away since it had regular refried beans in it.

This past weekend, I finally got around to making a taco dip recipe with meat and refried black soy beans. I didn’t have time to make my own low carb tortillas for chips, so I just ate this taco dip on some shredded lettuce.

The dip is fabulous! It tastes just like the regular higher carb dip made with high carb beans. In fact, it was so good, my son who doesn’t follow a low carb diet ate most of it.

How to make taco dip with meat low carb

You can also add in some shredded lettuce if desired. You can also replace the black soybeans with additional ground beef or leave them out.

This taco dip took a little longer than a standard 7 layer Mexican dip because I had to make my own refried beans. One of the local grocery stores sells these low carb black soy beans by Eden Foods. Specialty stores like Whole Foods may also sell them.

To make the low carb refried beans, I put the beans in a food processor after draining and rinsing them and process until they are smooth. I also add a little low carb milk which provides some liquid to help in processing them.

The refried beans are the first layer of the taco dip with meat. Next comes the ground beef layer.

I make my own low carb taco seasoning mix because commercially prepared ones usually contain added starch. But if you don’t have any prepared, you can just use the spice blend I list in the recipe. For those that have a keto friendly taco spice mix made, you’ll want to add about 2 to 3 tablespoons. Just add it after cooking the beef in a skillet over medium high heat until brown.

You can also use Crock Pot taco meat that’s been prepared ahead of time. And if your ground beef is still frozen, simply thaw it quickly in a big bowl of cold water. Or use the Instant Pot method that I provide in my no noodle lasagna recipe post.

Once the meat is prepared, you simply spread it over the refried soybean layer.

Some people use straight sour cream over the taco seasoned beef layer, but I like to use a mix of softened cream cheese and sour cream. I do find it’s a bit tough to spread, but I managed to completely cover the ground beef with it.

Although it’s pretty easy to make your own guacamole dip, I used a prepared one to save a little time. I checked the label to make sure there wasn’t any high carb ingredients added to it. But you can use your own homemade keto guacamole.

The guacamole is spread over the ground beef layer. Next you’ll add the toppings.

Topping off the layered taco dip

The first topping I add to the taco dip with meat is some freshly diced tomatoes. A layer of cucumber salsa would work as well if you want to cut back on the tomatoes. And you can omit the onions in the salsa to lower the carbs more.

Next comes the grated cheese. I use freshly grated cheddar cheese for the topping to avoid the added starch in pre-shredded cheese. A box grater works great, especially if you don’t have a grating blade on a food processor.

If you don’t have a box grater, you definitely should get one. It makes grating cheese a breeze as well as getting the zest from limes and lemons. I’ve had my box grater for over twenty years and it has served me well. And, I like to use it even though it’s a little more work than a food processor.

I also like to add black olives, but I ended up putting it on my individual servings because I made this layered taco salad dip with ground beef to share with my family and they aren’t fans of olives like I am.

Jalapeno slices or sliced green onions are also great additions for the top to add color and flavor.

You don’t have to be celebrating Cinco De Mayo or Taco Tuesday to enjoy Mexican inspired recipes. If you’re looking for similar dishes, check out some of these other low carb recipes:

If you don’t have time to try the recipe now, be sure to pin it for later! And be sure to leave a comment below to let me know what you thought of the recipe. 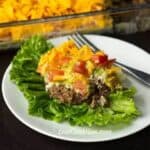 Author: Lisa MarcAurele
4.5 from 4 votes
This layered low carb taco salad dip with ground beef is made with refried soy beans. But, the soy can be replaced with additional beef if desired.

If omitting the bean layer, use another 0.5 to 1 pound of ground beef with additional seasonings. A low carb taco seasoning can be used in place of the mixed spice blend for the seasoned ground beef.