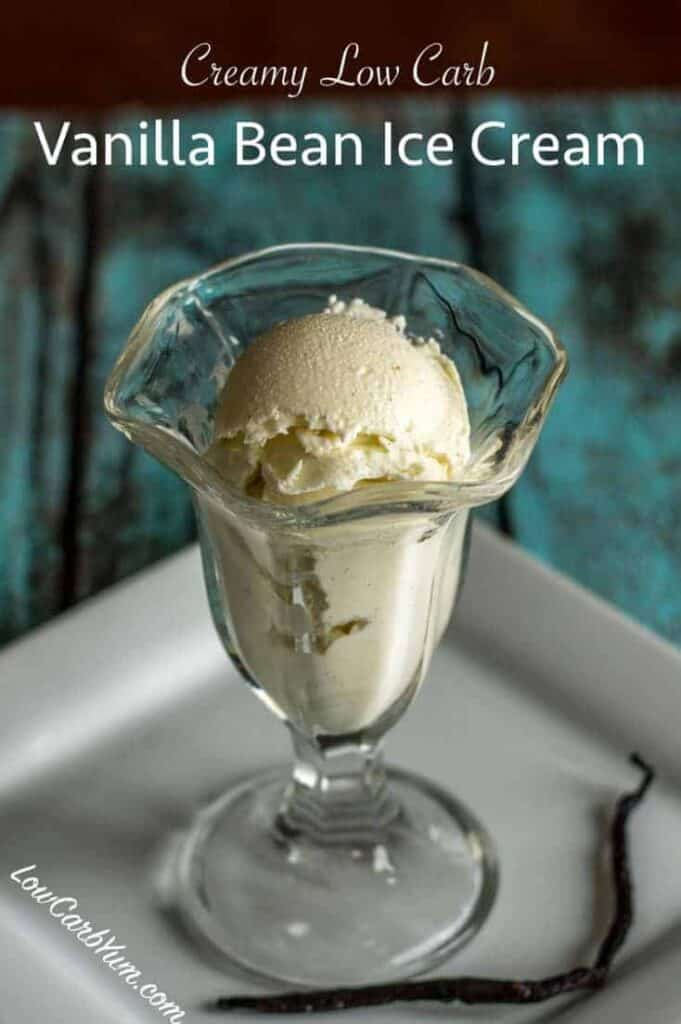 I have a confession to make. I am addicted to frozen desserts even in the winter.

Even though the temperature has dropped to below zero this week in Connecticut, I've been enjoying homemade ice cream.

The biggest problem with my old machine is that I had to make sure the gel in the canister was frozen before I could make homemade ice cream.

I don't have the extra space in the freezer to store the canister. And sometimes I like to make a couple batches of my favorite sugar free ice cream recipe on the weekend so I wanted to upgrade to an ice cream maker with a built in compressor.

The other benefits of using a machine with its own cooling unit is that the temperature stays cold while processing and you can leave the ice cream in the unit for a while after it's done without worry that it will melt.

Now I can make my beloved ice cream on a whim without having to freeze the canister beforehand!

While reading the Amazon reviews for various ice cream makers, I discovered that many people were recommending using an ice cream making method developed by Jeni Bauer that supposedly results in very smooth and creamy ice cream.

Before buying her ice cream making book, it was suggested to try some of her recipes available online first. So, I did a quick Google search and found this recipe by Jeni Britton Bauer for Vanilla Bean Ice Cream.

The original recipe calls for cornstarch as a thickening agent. I added xanthan gum instead and added it right to the heated mixture. Jeni recommends boiling the milk/cream mixture for 4 minutes to denature the proteins.

The cooked cream mixture is then slowly mixed into a small amount of softened cream cheese which enhances the taste and texture.

The hot mixture is cooled down in a water bath for 20 minutes before processing in the machine. I just set a smaller bowl into a larger bowl filled with ice water.

As its cooling, you need to stir it every few minutes to ensure a skin doesn't form on the top. I found the mixture to be really thick. Perhaps I should cut back on the xanthan gum next time.

This was my first time making a sugar free ice cream recipe using a gelato paddle versus the regular ice cream paddle so I have nothing to compare to other than the fact that the result was similar in texture to a smooth gelato.

After about 40 minutes of churning in the ice cream maker, the mixture looked similar to a very thick soft serve ice cream. It took some time to scrape the mix off the paddle with a slim rubber spatula. Then I transferred it to a Tovolo ice cream tub container specifically made for storing homemade ice cream.

As directed in the original recipe, I covered the top of the homemade sugar free ice cream with plastic wrap so it froze without touching any air.

The sides of the Tovolo container are also insulated with air which prevents the ice cream from crystallizing so it will keep longer in the freezer. I really like this design and it makes it easy to glide a scoop along the top of the frozen ice cream.

It took a while for the ice cream to fully freeze, more than four hours. Like most homemade ice creams, it froze pretty hard. However, after letting it sit out for 5-10 minutes, it was easy to scoop.

The taste and texture of this homemade sugar free vanilla ice cream recipe is fantastic. I have to say that this is the smoothest and creamiest that I have ever made with or without sugar.

This homemade ice cream reminds me of the very expensive premium ice creams sold at the local seasonal shops in our area. I plan to buy Jeni's Splendid Ice Creams at Home book so I can experiment more with her ice cream making method.

And if you're looking for more low carb ice cream recipes, be sure to check out some of these: 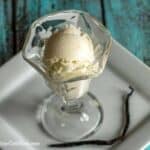 Makes about 3 ½ cups of ice cream or 7 servings Serving size is about ½ cup 5.9g net carbs

© LowCarbYum.com
Unauthorized use of this material without written permission from Lisa MarcAurele is strictly prohibited unless for personal offline purposes.
Single photos may be used, provided that full credit is given to LowCarbYum.com along with a link back to the original content.
« Sugar Free Chocolate Recipe Made with Stevia
Chocolate Truffle Candy Recipe (Sugar Free, Low Carb) »